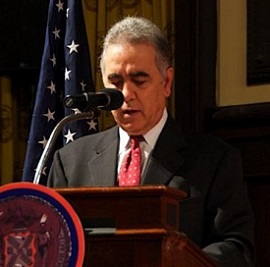 The Armenian Genocide Centennial Committee of Australia had invited this writer to speak at commemorative events in Sydney and Melbourne, and deliver a formal address at the New South Wales Parliament during the week of April 24.

On April 27, the Australian Turkish Advocacy Alliance sent a three-page letter to all Parliament members urging them to boycott my presentation. A Parliament member forwarded a copy of the letter to the Armenian National Committee of Australia in advance of my talk on April 29. The cleverly-worded letter, most likely written by the Turkish Embassy’s professional lobbyists, made several false claims and defamatory accusations.

The Turkish denialist group sought to import Ankara’s human rights restrictions to a democratic country like Australia by trying to muzzle not only this speaker’s right to free speech, but also the Parliament’s right to invite whomever it chose. Calling me a ‘propagandist’ who ‘benefits from conflict and hatred,’ the Turkish letter ‘strongly’ advised Parliament members not to attend my talk.

Gunes Gungor, Executive Director of the Australian Turkish Alliance, falsely reported that I am ‘related’ to Hampig Sassounian, simply because I shared his last name. Hampig was convicted of assassinating the Consul General of Turkey in Los Angeles in 1982. While the life of any human being is precious, Gungor sheds crocodile tears over the death of a single Turkish diplomat, ignoring the wholesale killings of 1.5 million innocent Armenians! How would Gunes Gungor like it if I were to accuse him of being related to several criminals I found on the internet, just because they shared the same last name?

Gungor in his letter also badmouthed the distinguished jurist Raphael Lemkin who coined the term ‘genocide’ based on his detailed studies of the extermination of Armenians by the Ottoman Turkish government. In a desperate search for any reason to tarnish Lemkin’s impeccable reputation, Gungor claimed that “towards the end of the meetings because of his aggressive comments he [Lemkin] was asked to leave the room.” Gungor did not even know how to spell Lemkin’s first name.

Despite Gungor’s attempts to undermine my address, Parliament members and guests, including scholars, elected officials, and Jewish community leaders gave me a standing ovation. Surprisingly, Gungor showed up at the Parliament to hear me speak, not trusting his own ability to have the event cancelled. While members of the audience were given ample time to ask any question they wished, Gungor and his two Turkish colleagues did not ask a single question. More surprisingly, as the three Turks were leaving the Parliament hall, one of Gungor’s colleagues was overheard saying, “on nights like these, I wonder what we are doing here!”

My other talks took place with packed audiences without disruption. According to the ANC of Australia over 1,100 people attended my first talk on April 24 in Sydney. I gave a second talk the next night in the same city. I then spoke at a similar event on April 27 in Melbourne at the presence of around 500 guests.

The only sour note during my journey was Prime Minister Tony Abbott’s message sent to the Sydney commemoration. Taking a page from Pres. Obama’s playbook, Abbott used every other word (horror, tragedy, terrible events, lost lives) except for genocide in his brief message. Vache Kahramanian, Executive Director of the ANC of Australia, wrote to the Prime Minister, telling him that his message will not be read to the audience because it is “of great insult to the Armenian-Australian community with its blatant omission of the Genocide word.” Kahramanian reminded the Prime Minister of his previous year’s message while he was opposition leader in which he had properly characterized the Armenian Genocide. In contrast to the Prime Minister, Australia’s Treasurer, Joe Hockey, the country’s most senior government minister, issued a formal statement clearly acknowledging the Armenian Genocide.

I left Australia greatly impressed with the political activism of the Armenian community of 50,000 which runs circles around the much larger Turkish community of over 200,000.