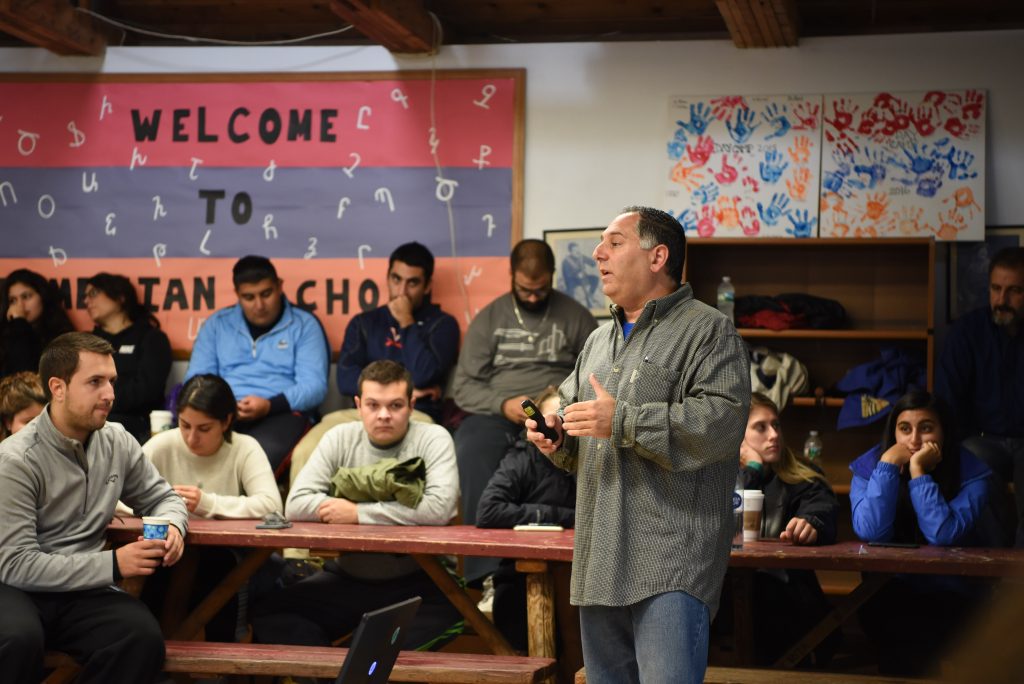 (ARMENIAN WEEKLY) FRANKLIN, Mass.—The Armenian Youth Federation-Youth Organization of the Armenian Revolutionary Federation (AYF-YOARF) Eastern Region United States held its annual senior seminar on the weekend of Sept. 30-Oct. 2 with more than 80 attendees at AYF Camp Haiastan. Given the circumstances and current situation in Artsakh (Nagorno-Karabagh/NKR), the central theme of the weekend focused on NKR.

After being present at the lectures and witnessing the dialogue discussed, the theme of the weekend could not have been more appropriate.

Following the Four Day War, which claimed the lives of over a 100 soldiers, the entire global community of Armenians were united in support of Artsakh and were ready to extend any type of assistance to their brothers and sisters in the homeland. This seminar became an opportunity for the AYF to inform and educate its membership on the current issues Artsakh and Armenia face, in order to stimulate the conversation of how young Armenian diasporans could be of service to our homeland.

The seminar began with a lecture by a great mentor—English editor of Asbarez News Ara Khachatourian, on the historical perspective of Artsakh as well as its relevance to our various fights for justice. Khachatourian began his lecture by mentioning the current situation in Syria as well as Turkish Member of Parliament Garo Paylan’s visit to Los Angeles in the previous week. He informed us on how in the last week, there were five deaths in the Armenian community of Syria and that the current situation due to the Syrian Civil War has only been escalating and effecting the Armenian community severely. When discussing Paylan, he explained the issues that the Armenians living in Turkey experience as they struggle for their rights. He added how during his visit, Paylan brought the challenges that people face in Turkey to reality and demonstrated his courage and leadership as he openly spoke about what needed to be done to address the problems in Turkey.

Khachatourian tied these two examples into the Artsakh conflict and how they were all fights for justice that the Armenian community must face without any fear. He then delved into the first Karabagh War, the process of Artsakh’s declaration self-determination, and winning a war against all odds. He explained that the initial war set the precedent that the people of Artsakh were going to fight for their lands at all costs—certainly nothing had changed in 2016.

The lecture then focused on the current geopolitical situation following the Four Day War. Artsakh had lost land, was unprepared war, and had experienced over a 100 casualties. Khachatourian explained the mediation process headed by the Organization for Security and Cooperation in Europe (OSCE) Minsk Group and how Artsakh has been put in a difficult situation, not given a voice in the negotiations.

The AYF members in the room came to the consensus that Artsakh was not going to give up any land and would not agree to any terms that would do so. Participants also realized that as diasporans, we should be ready for anything that will take place in Artsakh and to not have any fear when fighting for justice.

Being fearless became a common theme in Khacatourian’s lecture. He referred to a statement made by Paylan that stuck with him: “in the fight for justice, there is no place for fear.” Without a doubt, these words immediately stuck with all those in the room. We cannot question our missions. There is no room to fear the problems we face when fighting for justice and we must address all of our fights for justice with the same type of valor as our brothers and sisters worldwide.

The next lecturer was Varak Ketsemanian—a PhD student in Near Eastern Studies at Princeton University. Ketsemanian’s lecture focused on the political unrest in Armenia and the events that had taken place in July. He provided a very thorough presentation beginning with background information on the Sasna Tsrer group, including the motives behind their actions and what it ultimately resulted to. Initially, Ketsemanian informed the membership of several potential factors that could have contributed to the actions of the Sasna Tsrer, including the Four Day War, the failure of foreign policy, the arrest of Jirayr Sefilian, and even the attempted coup in Turkey.

He then went into detail on the police station takeover, the demands of the Sasna Tsrer, and the protests and demonstrations that their actions led to. The initial absence of media coverage, political brutality, and the ARF’s stance in support of the government were also key components of the lecture.

Ketsemanian concluded that due to protests having no leadership, conflicting resolutions, and the leaders of the Sasna Tsrer realizing it was in their best interests to surrender, this movement did not instigate great change. Instead, it even put a greater spotlight on some of the serious issues Armenia faces including police brutality, human rights violations, and the overall discontent and lack of unity among Armenian people. In the end, he proposed several questions that sparked a productive discussion among attendees.

The third group of lecturers were members of the Armenian National Committee (ANCA) Eastern Region U.S. Board. Members including Steve Mesrobian (Chair), Armen Sahakyan, and Dikran Khaligian all spoke about the ANCA’s current role in the Artsakh conflict, their overall work, and what we could be doing as AYF members to work with the ANCA.

Mesrobian touched upon the impact of the ANCA with U.S. foreign policy and brought into perspective what type of work the ANCA does with Congress. He urged local AYF members to become active citizens in their communities by voicing their concerns about Armenian issues to their congressman and getting out to vote. The action alerts of the ANCA and the overall effectiveness of campaigns like the #StopAliyev were also highlighted.

Sahakyan then explained how in the recent months the ANCA has been traveling across the Eastern U.S. to various states where large, active Armenian communities do not exist, in an attempt to motivate community members to become politically active. This work has led to the establishment of multiple ANCA groups, thus giving more contacts to the ANCA and contributing to active community members in regions where the Armenian voice in politics is not in the forefront.

Throughout ANCA’s presentation, the entire board emphasized the important role that AYF members can have within the ANCA and how productive the work of these two forces can truly be. The political pillar of the AYF is one of its key components that can lead to great strides in the advancement of the Armenian cause—especially with the help of the ANCA. This lecture only added fuel to the conversation of how AYF members in the diaspora could further their role of providing assistance to Artsakh and Armenia.

The final speaker of the weekend was Armenian Revolutionary Federation (ARF) Bureau member Dr. Khatchig Mouradian. Mouradian’s lecture began with pointing out the problems that the Republic of Armenia currently faces, ranging from gender roles, corruption, and unemployment and how it could be viewed in the context of different perspectives. His lecture was more discussion based, and the conversation transitioned into the role of women and their role within the ARF. He stressed the lack of women in leadership positions within the ARF and how this is something that we as an organization need to tackle.

He brought up multiple scenarios to problems and described what needs to be done in order to address them and find solutions. In doing so, he constantly emphasized that the AYF and ARF have to be the ones to make a presence and be ready to work at all times. Providing insight from his personal experiences, Mouradian said, “I joined the ARF because I realized it’s the only organization that can cause the greatest change to the Armenian nation when the members rise to the occasion.”

Dr. Mouradian explained some of the current policies of the ARF in Armenia, as well as the recent coalition with the government and their statement during the actions of Sasna Tsrer. He later opened it up to discussion for the membership to inquire more about the policies and gave everyone the opportunity to ask any questions they had about the ARF’s role in modern day Armenia. Through this dialogue, the attendees were able to receive very insightful and concrete answers about the ARF’s positions.

The lectures of this weekend seemed to fit together like pieces of a puzzle. We listened to the history of the Artsakh movement, the modern circumstances, and learned that there is absolutely nothing to fear in our righteous pursuit for justice. We learned about a pivotal case of political unrest that Armenia faced in the recent months following the Four Day War as well as the causes and effects surrounding it. The ANCA showed us how as diasporans we could be involved and provided example solutions to combat the conflict in Artsakh and issues in Armenia. And ultimately, Dr. Mouradian simply inspired us to get up, take what we learned from all of these experiences as the AYF-YOARF, and utilize them in order to be the change you want to see.

Together, we will move mountains.