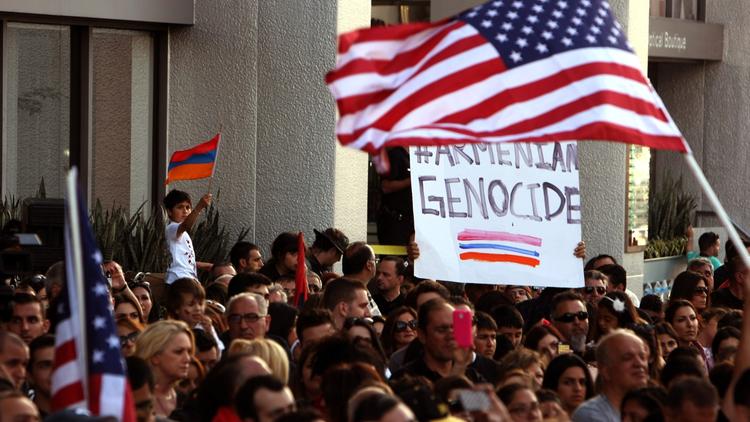 (Los Angeles Times) It’s become a frustrating rite for Armenian Americans. Every year, in the days leading up to the April 24 anniversary, advocates have lobbied President Obama to use the word “genocide” to describe the killing of more than 1 million Armenians at the hands of Ottoman Turks in the political upheaval surrounding World War I. And every year, despite promising as a candidate to do so, Obama has declined to use the word.

But this time, advocates are hoping, it will be different. This year marks the 100th anniversary, a moment of intense interest, increased symbolism and a swirl of activity, including a cross-country race and an international pop music tour. It is also a period of the Obama presidency, its twilight, in which the president has shown a greater boldness on core issues of principle as he begins to consider his legacy.

Advocates say they have been told that the administration is giving its most thorough review to the issue since 2009, Obama’s first year in office. But the Turkish government continues to dispute that genocide took place and has poured millions into lobbying efforts to oppose official U.S. recognition, including bipartisan resolutions in Congress aimed at labeling the killings as genocide.

Despite conclusions by historians that genocide occurred, concerns over upsetting Turkey, a key ally in a crucial region, have won over numerous presidential administrations and members of Congress.

Many Armenian Americans have refrained from criticizing Obama in the hope that this will be the year he breaks that precedent.

Armenian Americans have been bolstered by a symbolic victory last year. With help from members of Congress, they persuaded the White House to display a rug associated with the genocide in the White House Visitors Center as part of a temporary exhibition. The Ghazir rug, crafted by orphans, was presented as a gift to President Coolidge in 1925 to recognize humanitarian assistance. But like many efforts at recognition, victory was partial: The rug was returned to storage.

Obama had been a forceful voice on using the term genocide as both a senator and a presidential candidate. During his campaign, he pointed to his criticism of former Secretary of State Condoleezza Rice in 2006 for replacing a U.S. ambassador to Armenia, John Evans, who used the term “genocide.”

“I shared with Secretary Rice my firmly held conviction that the Armenian genocide is not an allegation, a personal opinion, or a point of view, but rather a widely documented fact supported by an overwhelming body of historical evidence,” Obama said in 2008. “The facts are undeniable. An official policy that calls on diplomats to distort the historical facts is an untenable policy.”

Top White House officials — including, when they were senators, Vice President Joe Biden and Secretary of State John F. Kerry — have also gone on the record supporting the term as essential to promote reconciliation between Armenia and Turkey and to prevent other genocides.

Samantha Power, the U.S. ambassador to the United Nations, wrote extensively about the need to confront the history in her book, “A Problem from Hell: America in the Age of Genocide,” which won the Pulitzer Prize in 2003.

Since becoming president, Obama has said his views on the subject have not changed. But he has not used the term.

Aram Hamparian, executive director of the Armenian National Committee of America, said he had been told by “very senior people in the White House, in particular the National Security Council,” that the administration is conducting its first thorough review of the issue since 2009.

Administration officials will not comment on the review process and most observers do not expect to find out what Obama will say until April 24, given the sensitivity of the issue.

State Department spokesman Alec Gerlach said in a statement that “the president and other senior administration officials have repeatedly acknowledged as historical fact and mourned the fact that 1.5 million Armenians were massacred or marched to their deaths in the final days of the Ottoman Empire, and stated that a full, frank and just acknowledgment of the facts is in all our interests, including Turkey’s, Armenia’s and America’s.”

A Turkish government official, who declined to be quoted by name citing an internal policy, said that the deaths did not meet the legal definition of genocide and that it would be a mistake for the U.S. to use the term.

“I can assure you there would be a huge disappointment on the Turkish side,” the official said. “It’s not up to the Congress or to the leaders of other countries to make judgments on other countries’ history.”

Rep. Bill Shuster (R-Pa.) warned colleagues in a recent letter that adopting a congressional resolution recognizing the genocide “could be cataclysmic and undermine U.S. interests,” and it risks alienating “one of our last allies in the region who is working hand in hand with U.S. soldiers and our allies to combat ISIS,” using an acronym for the militant group Islamic State.

Rep. Ed Royce, the Fullerton Republican who chairs the House Foreign Affairs Committee, supports recognizing the genocide but does not plan to hold a vote on a congressional resolution this year because “on the 100th anniversary it’s best to have unified voices recognizing the premeditated genocide of 1.5 million Armenians,” he said in a statement.

Rep. Adam B. Schiff, the Burbank Democrat who has long called for formal recognition of the genocide, said the U.S. had a “moral urgency” to use the term this year, before the last remaining survivors die. He predicted that Obama or some future president would eventually use the word, and that “these prior administrations will have a lot to answer for, as to why they were complicit in a campaign of genocide denial.”