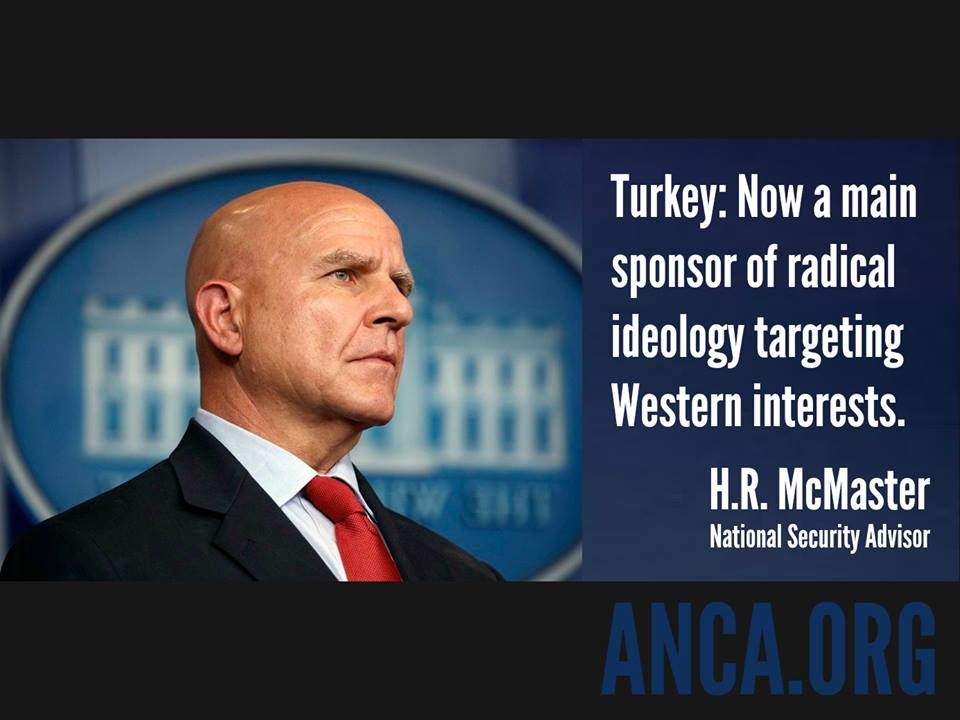 “A lot of Islamist groups have learned from” Turkish President Recep Tayyip Erdogan and his Justice and Development Party (AKP), said McMaster.

It is he said a “model of really operating through civil society,” McMaster said, “then the education sector, then the police and judiciary, and then the military to consolidate power in the hands of a particular party, which is something we’d prefer not to see and is sadly contributing to the drift of Turkey away from the West.”

“We’re seeing great involvement by Turkey from everywhere from western Africa to Southeast Asia,” McMaster said during an appearance in Washington. “The Balkans is an area of grave concern now.”

McMaster stopped short of accusing Ankara of funding actual terrorist groups. Instead, he voiced concern that Turkey was following in the footsteps of Saudi Arabia in the 1970s, and more recently Qatar, by funding groups that help create the conditions that allow terrorism to flourish.

“We didn’t pay enough attention to how extremist ideologies were being advanced through madrassas and mosques, and so-called charities more broadly,” he said.

“The same Erdogan regime that the White House rightfully vilifies for sponsoring extremist violence today is – against all reason – granted a U.S. veto over honest U.S. remembrance of Turkey’s genocide of Armenians and other Christians a century ago,” said ANCA Executive Director Aram Hamparian. “It’s long past time for America to finally reject Turkey’s gag-rule, bring an end to Ankara’s denials, and overcome Erdogan’s ongoing obstruction of justice for this still unpunished crime,” said Aram Hamparian, Executive Director of the Armenian National Committee of America.

“We expect the United States, which we continue to recognize as our friend and ally, to display the same stance to our country, to cease all forms of cooperation with terrorist groups such as YPG and provide more concrete and effective support in our ongoing determined fight against terrorism and radicalism,” the ministry said in a statement.