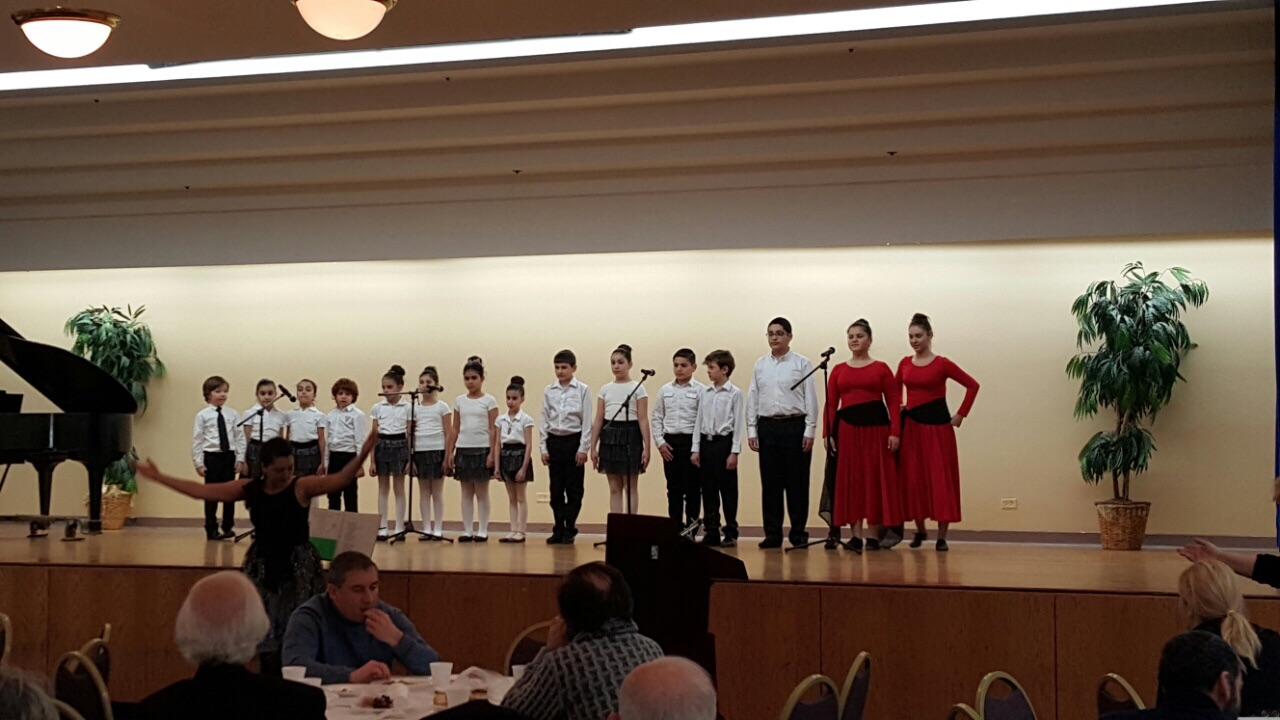 (ARMENIAN WEEKLY) NEW YORK—The 28th anniversary of the Sumgait pogroms was remembered and commemorated on Feb. 28 at St. Vartan Cathedral in New York. It was sponsored and organized by Marina Bagdasarova of the Brooklyn Armenian Mission Parish, and Dr. Svetlana Amirkhanian, the president and founder of Direct Help for Armenian People (DHAP).

Following a solemn requiem service after the Holy Badarak service at St. Vartan Cathedral, more than 100 people, many former residents of Azerbaijan, congregated in Kavookjian Hall for a special commemorative program of poignant remarks, poetry, and music.

Starting off with a minute of silence for the hundreds of Armenian victims who were brutally massacred in Sumgait on Feb. 27-29, 1988, Bagdasarova related that in addition to the actual murders, another 18,000 Armenians fled to Armenia, many of whom were killed in the Dec. 7, 1988 earthquake.

Sumgait was not alone, she related Bagdasarova. The violence continued until 1992 in Kirovabad, Baku, and Maragha by Azeris using axes, knives, crowbars, clubs, and hammers, cutting Armenian victims to pieces, raping, torturing, and throwing men, women, and children off balconies. These acts of such perverse cruelty were reminiscent of the 1915 Armenian Genocide perpetrated by Ottoman Turkey.

“We will never forget. We will never forgive,” Bagdasarova declared. “Genocide and massacres must not be forgotten. We must attempt to achieve recognition, justice, and punishment of the perpetrators. Our hope and legacy for the future is to stop violence for future generations,” she said.

Amirkhanian noted that although she has never been to Sumgait or Baku, she felt “very close to them.” The massacres in Azerbaijan brought another wave of immigrants to the United States, she said, and led to the establishment of an Armenian school in Brooklyn for the newcomers. “The preservation of our Armenian school is very important so that our history, culture, language will never be forgotten or lost. We’re few but we are strong, and we will survive,” she said with great emphasis.

Michael Abagyan, born in Azerbaijan, stressed the importance of informing members of the U.S. Congress of such crucial issues. A group of Armenian National Committee of America (ANCA) members did just that in December. “We went to members of the House of Representatives and the Senate, and asked for help with our issues,” he reported.

Representing the ANCA [Eastern Region], Dr. Artur Martirosyan pointed out that dozens of ANCA members demonstrated in front of the Azerbaijani Mission to the United Nations on Feb. 26. “We must work together for Artsakh’s [Nagorno-Karabagh] independence. We should be more proactive,” he declared.

Yuriy Tsaturyan revealed that Artsakh, though small, “has more intellectuals than any other piece of territory.” And Vitaliy Atamalyan spoke of coming to the United States and working to get Armenian refugees together in order to “advance out history and culture among the young.” Both speakers were former residents of Azerbaijan.

The seven young members of the Arminstring Ensemble, under the musical direction of Diana Vasilyan, offered heartfelt performances of compositions by Khachaturian and Tchaikovsky, and of E. Hovhannisyan’s “Yerevan Erebuni.”

The 15 youngsters of the Astghigner Music Ensemble offered several heart-warming selections under the baton of their musical director, Maria Sahakyan. These children hail from the Brooklyn Armenian parish made up of mostly immigrants from Azerbaijan. Their rendition of the soul-searing and mournful song “Adanayi Voghp” brought tears to many in the audience. The song was accompanied by two of the older girls who, dressed in black and red, performed a slow tribute dance dedicated to the martyrs of Adana.

The Very Rev. Fr. Mamigon Kiledjian, dean of the St. Vartan Armenian Cathedral, expressed his appreciation to the organizers, as well as to the speakers and performers. A special thank you was voiced to Ara Manoukian, the director of the Ardzagang Armenian TV, for advertisement and promotion. A prayer for the Sumgait martyrs and the singing of the “Hayr Mer” concluded the memorable event.