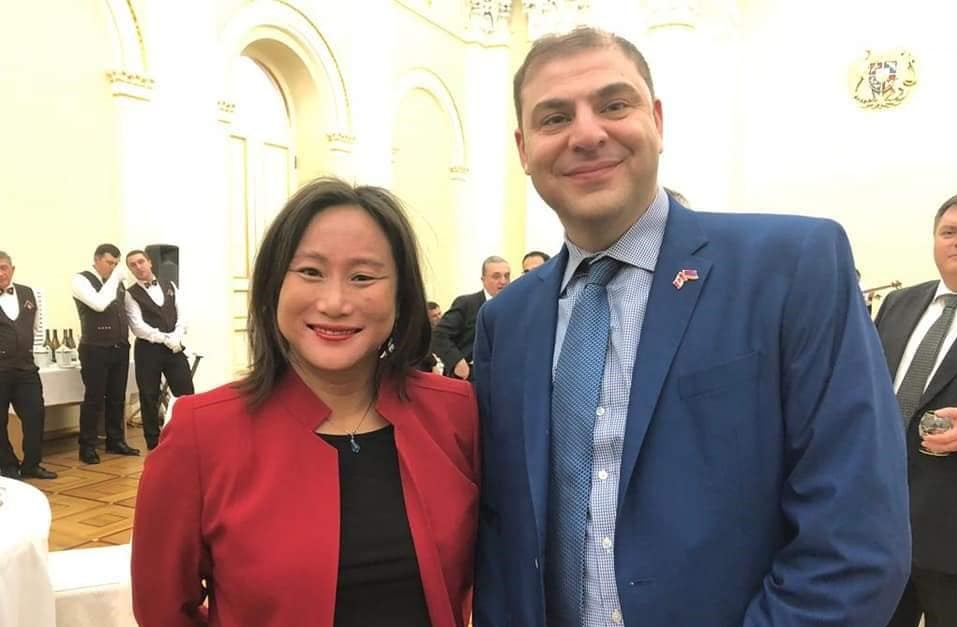 Q- Canadian Armenians couldn’t’ help but to be captivated by our prime minister’s visit to Armenia. Apart from the favourable optics that resulted with the trip, what are some of the long term political and economic implications of Trudeau’s time in Armenia

A- The bilateral visit itself yielded two tangible results – an air travel agreement between the two countries and the Arnold Chan Initiative for Democracy in Armenia.

The air travel agreement puts in place the necessary agreement between governments to facilitate more direct air connections between Armenia and Canada. The immediate outcome will be a code share between Air Canada and a European airline that flies to Yerevan. The code share is intended to allow passengers to purchase a single ticket through Air Canada, reduce wait times in Europe and ensure that most travellers from Toronto or Montreal will be able to fly to Yerevan on Air Canada with a single connection. The long-term outcome is to have a Canadian airline offer direct flights to Yerevan from Toronto or Montreal once there is sufficient demand.

The Arnold Chan Initiative is a one-time funding of $99,000 by the Canadian government for five non-governmental organizations in Armenia which work to promote democracy, civic engagement, gender equality, minority rights and environmental awareness. Currently, there is ongoing work to try to make the funding annual, and extend the initiative to more organizations.

Although no tangible results have been realised yet, another outcome of the visit is that there has been considerable progress on the effort to have permanent Canadian diplomatic representation in Armenia (an embassy or a consulate). Decision-makers, including the Prime Minister himself, became aware of why an embassy was needed and what the benefits would be.

Q- Armenia hosted the 17th annual Francophonie Summit. Apart from showcasing our hospitality skills, what long-term impact do you envision will stem from Armenia’s time in the global spotlight?

A- I think the main impact is actually the hospitality (and logistics and security) skills. If Armenia can host the Francophonie, it can host other large international events such as UN summits or large private conferences. Otherwise I suspect the Francophonie Summit will soon be forgotten.

Q- How was the ANCC able to facilitate the bilateral meetings and the visit itself?

A- It was almost a given that the Prime Minister would attend the Francophone Summit. Canada is an important member of the group and an enthusiastic participant at international meetings (for instance, Canadian MPs and Senators had attended a meeting of the Francophonie Parliamentary Assembly in Yerevan earlier this year and Ottawa often hosts Francophonie meetings). However, ANCC worked closely with the Prime Minister’s Office, Minister Joly’s office (and previously Minister Bibeau’s office), Global Affairs Canada (including diplomats active in Armenia) and our friends in Parliament to emphasize the need for a bilateral visit apart from the summit. These efforts commenced almost two years ago and involved numerous meetings, letters and one on one conversations. While we don’t have any direct insight into the decision-making, we believe that our lobbying efforts played a part in the Prime Minister deciding to hold a bilateral visit.

Q- Armenia has been in the midst of major democratic change. What would be the significance of Trudeau’s visit in that context. How can Canada assist in that process?

A- Trudeau’s visit and indeed the entire Francophonie Summit gave legitimacy to the new government. The heads of government and attending heads of state recognized that the new regime had the authority to govern Armenia and accepted that the will of the people had been carried out. However, what’s most important is that Canada assist Armenia in creating the institutions that ensure that transitions of government are done in a less exceptional manner. The Arnold Chan Initiative is a good first step, as well as ties between Canadian and Armenian universities, but more needs to be done.

Q- As a Canadian Armenian yourself, did you feel any added pressure for the trip to conclude without any major hiccups.

A- Yes and no. Yes, in that we wanted the trip to please the Prime Minister’s office from a political perspective, but we also didn’t feel like we would be responsible if the Prime Minister decided to repeat some of the errors from his summer trip to India. Similarly, as Armenians we very much hoped that Armenia hadn’t bitten off more than it could chew, but at the same time we felt like people were willing to excuse some issues because Armenia had gone through so much disruption this year. In the end, everything worked out perfectly. The Prime Minister’s staff could not have been happier from a foreign relations or domestic public relations perspective. And Armenia itself did an incredible job. The delegates we spoke to were all extremely pleased with how well things were run and how fantastic Yerevan looked.

Q- The Diaspora, and more specifically Canada, has a layered perception of the current state of Armenia. How do Armenians that reside in Armenia view their counterparts in Canada?

Almost everyone you meet in Armenia knows someone in Canada (and generally someone very close to them). They have a very good idea of what Canada is and what the situation is for Armenians. I’m not as sure that people know about the situation of the traditional Armenian diaspora in Canada (the diaspora made up of people who are not recent emigres from Armenia) beyond a few famous names and the fact that Canada recognizes the Armenian genocide. To be honest, I don’t think that will ever change. There really isn’t very much reason for the average Armenian to take an interest in the community we have built in Canada.

Q- Compared to previous times you’ve travelled to Armenia, was there a noticeable narrative shift surrounding the local government and its approach to public affairs?

A- People certainly seemed more optimistic about the situation, but much of that has to do with improved economic circumstances and immigration to Armenia from various diaspora communities with their own issues. In the bubble of downtown Yerevan (where I remained because my trip was for a very limited purpose), it can feel like Armenia has progressed considerably, but I think everyone can sense that it is something of a mirage. One big difference is that people have some hope that the government will be better now – that hope is new, but I think that is just because of the novelty.

Q- Are there any plans for Prime Minister Pashinyan and or President Sarkissian to visit Canada?

A- I’m not aware of any immediate plans, but I believe there is a standing invitation for either one to visit?

Q- And finally- there was a video circling social media where our prime minister engages the crowd with an Armenian phrase, sharing he had learned it from an Armenian friend. For those of us who are tempted to play the “I wonder if we know the friend” game, any clues?

Prime Minister Trudeau had an Armenian friend (in Montreal) who taught him the phrases.

He had used them with me about 10 years ago, so I reminded him and asked why he wasn’t indulging the people. He obliged, and expressed two different phrases on a couple of occasions. “Vaghuh tbrots bidi yertam” was a crowd favourite.