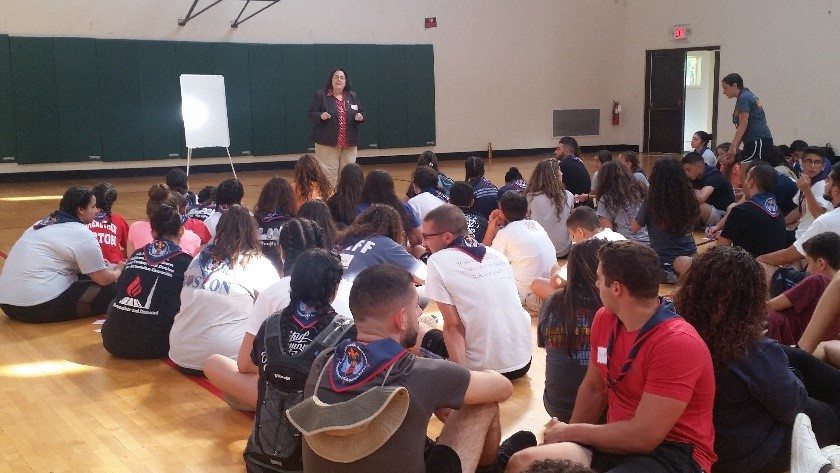 (ARMENIAN WEEKLY) Before summer ends and school begins, Homenetmen scouts from all over the Eastern Region of the U.S. look forward to Panagoum (camping assembly, jamboree). This year, hosted by the Washington, D.C. chapter, more than 150 scouts age 8 and up gathered at Camp Round Meadow in Sabillasville, Md., from Aug. 18 to 23, to take part in the Homenetmen U.S. Eastern Region’s 30th Annual Panagoum.

Led by Regional Executive member khumpabedouhi (group leader) kouyr (sister) Tamar Samuelian, the khumpabedagan gazm (group-leader staff) planned a variety of activities, games, competitions, crafts, hikes, and lectures that encouraged and empowered scouts to better understand and be proud of their Armenian heritage and their role as Armenian scouts, and prepared them for next summer’s World Jamboree in Armenia.

We were fortunate to have a plethora of lecturers throughout this panagoum who invigorated the scouts with their knowledge of Armenia’s history and Homenetmen’s history and their enthusiasm for the Armenian cause. Yeghpayr Kevork Tatarian spoke to the scouts about Homenetmen’s garuyts (structure), helping the scouts understand the organizational levels of Homenetmen and how they must proceed within their chapters in an orderly way. Ungerouhi Elizabeth Chouldjian from the Armenian National Committee of America (ANCA) spoke about the various Hai Tad initiatives of the ANCA and how we as Armenian-Americans can work to help the Armenian cause. She encouraged the scouts to become ambassadors in their hometowns by informing and educating non-Armenians about who Armenians are through history, food, dance, language, etc.

Armenian Revolutionary Federation (ARF) Eastern Region Executive member unger Hovsep Avakian, together with Permanent Representative of the Republic of Artsakh to the U.S. Robert Avetisyan, surprised the scouts with a visit. Unger Hovsep, stressing the importance of returning home to Armenia, said: “Armenia will always be your homeland. You will always have a home to return to.” Avetisyan briefed the scouts on Artaskh’s history and spoke about the ongoing conflict between Artsakh and Azerbaijan. He stressed the importance of the body of land called Artsakh, stating, “Without Artsakh there is no Armenia, without Armenia there is no Diaspora.”

Der Sarkis Aktavoukian spoke to the scouts about the foundations of Christianity and how keeping our Christian religion is an important part of what makes us Armenian. Yeghpayr Vahe Tanashian concluded the lectures by speaking about the founding fathers of Homenetmen and reminding the scouts of the goals and objectives the founders set in place for Armenian youth.

In keeping with the theme of Armenia and our identity as Diasporan Armenians, the much-anticipated kharuygahantes (bonfire presentation) Sunday night presented 12 fedayees who fought for our people and our lands, culminating in a hand-to-hand, shoulder-to shoulder Kochari dance showing the strength and perseverance we have as descendants of strong-willed Armenians. Throughout the kharuygahantes, scouts performed a variety of skits and ganches (calls), showcasing their creativity, humor, and pride in their Armenian heritage. To conclude the kharuygahantes, all the scouts joined hands to dance the papouri, inviting parents and guests to join in.

On Monday, all the scouts, parent volunteers, and khorhourt (council) members hiked up to Camp Green Top to watch the newsworthy solar eclipse that happens only once every 40 years. Scouts were given UV-ray glasses, made UV color changing bracelets, learned about the different phases of the sun during a solar eclipse, and heard the Native American story behind a solar eclipse.

Panagoum concluded on a high note: Scouts played trivia games, participated in Wacky Olympics, and had a much belated Vardavar water-balloon fight. On the last night, nestled around a big fire, scouts roasted marshmallows and made s’mores while singing heghapokhagan (revolutionary) songs and reciting ganches (mostly about food) and reveling in the fun they had had over the preceding five days.

Prior to the closing of this summer’s panagoum, a yertman araroghoutiun (oath-taking ceremony) was held for the newest chapter on the East Coast, the Charlotte miavor (unit). Five scouts received their poghgabs (neckerchiefs) and will return to their chapter with pride and newly gained knowledge to impart. Following the ceremony 21 noteworthy scouts were awarded their ayp gark (first rank). Congratulations to all!

Saying goodbye at the end of panagoum, after spending what seems like forever together, is hard, but with World Jamboree upon us, we’ll be spending a lot more time together throughout the year! It’s goodbye for now, but see you soon: Tsedsoutiun, lreh yeghpayr, miayn tsedsoutiun, tartsyal geh hantibink ou gerkenk miatsayn.

Thank you to the Washington D.C. chapter executive, khorhourt, and parent volunteers for the delicious food and all their hard work in making this panagoum a success. Thank you to kouyr Maral Kachichian for volunteering her time to teach our scouts all kinds of arts and crafts. Most importantly, thank you to all those Eastern Region scouts for coming to the 30th annual Eastern Region Panagoum and making it the great success that it was! Mishd partsr mnatsek yev partsratsoutsek.