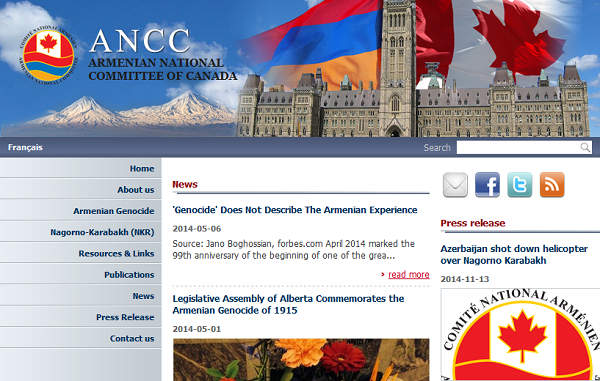 OTTAWA—Early in the morning of Nov. 16, the websites of several Armenian Canadian organizations were hacked and Azerbaijani propaganda was placed on the sites. The ANCC deplores such despicable attacks on Horizon Weekly and Armenian National Committee of Canada (ANCC) websites and calls on Canadian, provincial and regional governments to strongly condemn such a heinous and racist act.

“We need the Canadian governmental actors to publicly condemn these acts as they are becoming more and more frequent. This is not the first time that Armenian Canadian websites have been violated by Azeri and Turkish hackers,” said Dr. Girair Basmajian, President of the ANCC. “Other similar violent incidents took place in 2008, where members of Armenian youth organizations were threatened with a sword and blood by Turkish and Turkic ultra-nationalist Grey Wolves.”

This latest attack is all the more troubling as it took place only days after the November 12 brutal shooting of an unarmed helicopter in Nagorno Karabakh Republic, killing all three Armenians on board. “This is yet another example of Azerbaijan violating the peace treaty of 1994,” added Dr. Basmajian. “On the eve of the Centennial of the Genocide of the Armenians, it is appalling that more violence is being directed against Armenians. We seem to be witnessing an escalation of violence here on Canadian soil as well.”

With recent outbreaks of hate-speech against Armenian Canadians and on the eve of the 100th anniversary commemorations of the Armenian Genocide on April 24 in Ottawa, we are hoping that governmental and police bodies will take these actions directly targeting the Armenian community seriously and protect our community members, including youth, from such violent incidents.

After last spring’s dangerous action by Ottawa police in allowing provocative Turkish protestors to confront and disrupt the Armenian community’s annual Genocide commemoration events by celebrating and dancing with loud music, Canadian Armenians are particularly concerned that Canada be proactive in not tolerating or encouraging confrontation.

“Armenian Genocide deniers should not be given permission by Ottawa Police to silence a peaceful commemoration event,” the ANCC said in a statement.

“As a country advocating peace and human rights Canada should step up, take action and prevent any escalation of future violence.”