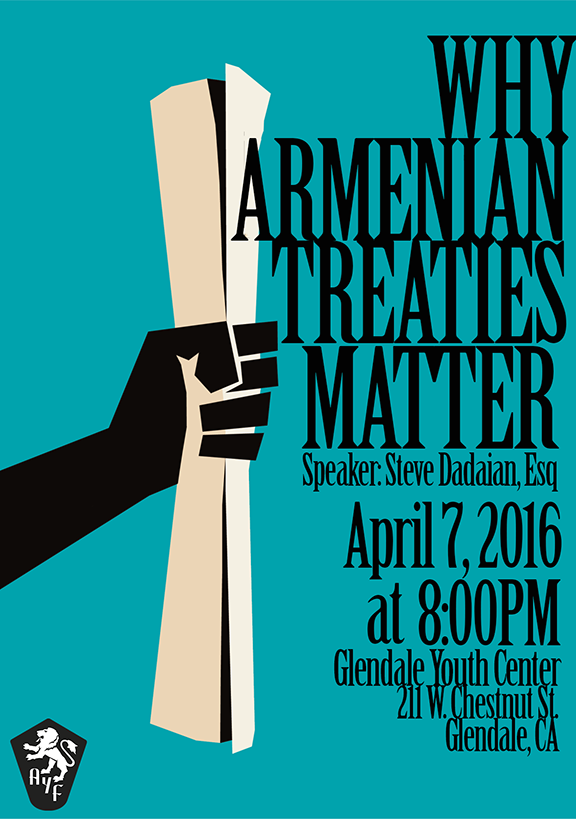 GLENDALE—The Armenian Youth Federation – Western United States (AYF-WUS) is hosting a public forum called “Why Armenian Treaties Matter” on Thursday, April 7 at 8 p.m. at the Glendale’s Krikor & Mariam Karamanoukian Youth Center. Steve Dadaian, Esq will give an in-depth presentation on the treaties most relevant to Armenia’s statehood and claims to Western Armenian territories.

The educational will seek to educate the public about the major treaties signed around the time of Armenia’s first independence, and how they inform the struggle for the Armenian cause today. Some of the topics covered include the Treaty of Sevres, which created the mandate for Wilsonian Armenia, as well as the Treaty of Kars, which was the basis for the Armenian Revolutionary Federation’s (ARF) strong opposition to the 2009 Turkish-Armenian protocols.
“Education is one of the five pillars of the AYF, and a significant key to becoming successful, informed activists,” said Verginie Touloumian, chairperson of the AYF-WUS’s educational central council. “These treaties have shaped Armenia’s geopolitical reality today, and it is vital that our community understands the relevance of these binding international documents.”
Steve Dadaian is an ANCA national board member and a practicing attorney. Following the presentation, there will be an open Q & A session and discussion. Admission to the event is free and it is open to the public, and will take place at the Glendale Youth Center, on 211 W. Chestnut St., Glendale, CA 91204. Light refreshments will be provided.
Founded in 1933, the Armenian Youth Federation (AYF) is a grassroots, social justice organization, with the purpose of advancing the moral, social, and intellectual development of Armenian youth. With a legacy of over eighty years of community involvement and organizational structures in over 17 regions around the world, the AYF stands prepared to play a leading role in the preservation and advancement of the Armenian nation.