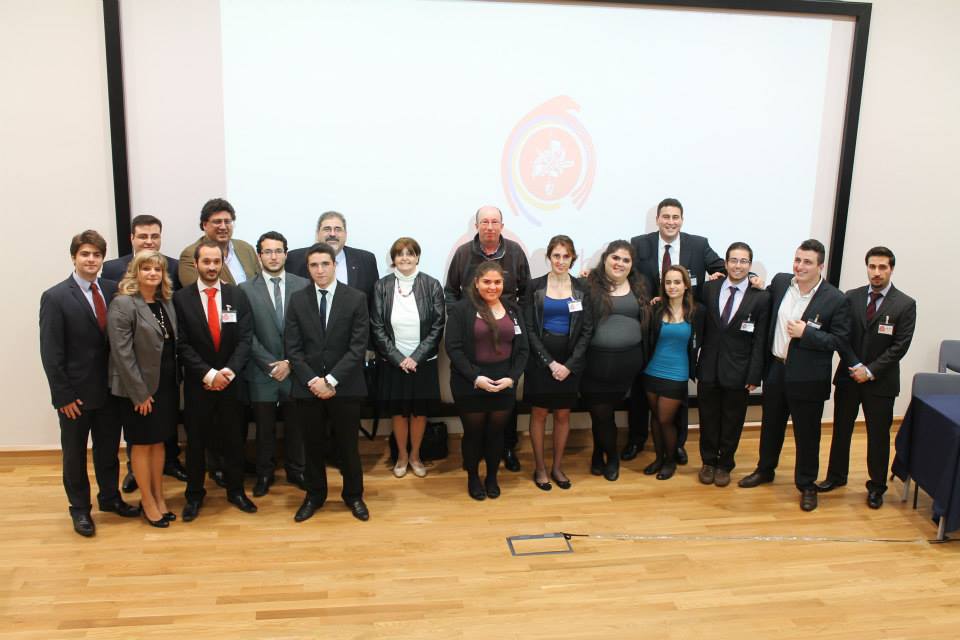 (YERIDASART) The New Lecture Theatre at the University of Westminster saw AYF London Khanasor host five extremely esteemed speakers and experts on the topic of Nagorno-Karabakh, providing a 360° outlook on the lands we call Artsakh. Under the chairmanship of Enger. Vahan Krikorian, We were proud to have Mr Stephen Pound MP, The Baroness Cox, Mr Russell Pollard, Mr Giro Manoyan and Dr Antranig Kasbarian analyse Artsakh today through the lens of their respective expertise.

Following a harrowing video documenting life on the ground during the Nagorno-Karabakh war from 1988 to 1994, the Lady Cox presented her thoughts and experiences associated with Artsakh from a humanitarian perspective. Often risking her life by flying through conflict-zones during the war, the Baroness Cox documented her efforts to supply medicinal drugs and painkillers, witnessing the results of the planned ethnic slaughter of Armenians by the Azeri military first-hand. The Lady Cox also maintained that the land issue regarding Nagorno-Karabakh is an outcome of Josef Stalin’s “Salami” divide and conquer diplomacy – not one of being ancient Azeri lands forcefully expropriated from their hands, but instead one of capping Armenian hold in the Caucuses and in the USSR. The Baroness Cox also recited an extremely emotional poem written by a young Armenian named ‘Gegham’ from Artsakh, whom she encountered during her countless visits to the region during the war, recounting the pain of being forced to flee his homeland.

The Lady Cox provided a warming comment on the Armenians: “What I love about the Armenians is that they create beauty out of the ashes of destruction.”

Along with her Humanitarian Aid Relief Trust (HART) recreation centre, an institute that must be recognised as exponentially improving the lives of young Armenians in Artsakh, the Baroness Cox sees Artsakh today as a place of serenity and raw beauty.

Stephen Pound, a Labour Member of Parliament and an eternal friend of Armenians, assured the audience that the Armenians will be represented and fought for in the British Parliament, with Mr Pound in the House of Commons and the Lady Cox in the House of Lords. Mr Pound’s presentation was centred on the United Kingdom’s foreign policy towards Nagorno-Karabakh. Through, as he described, “BP-led diplomacy” Artsakh has faced injustice from the British government due to vested interest in the “failed-state” of Azerbaijan today. He also touched upon the constant aggression of the Azeri government and military that still persists today; taking form in an aggressive propaganda machine and the sniping of innocent Armenian civilians, old and young, in Artsakh.

Russell Pollard, an extremely well travelled photojournalist, proceeded to recount his visits to Artsakh and to Armenia. Like many others, Mr Pollard had first encountered Armenia by accident, and since his first visit in September 2009, he has created a photographic journey, which can be found here. Russell’s first visit to Shoushi, in May 2010, was “disorientating” as he encountered many Armenians who had loved ones perish, or are still even missing today, as a result of the Nagorno-Karabakh War. For example, Mr Pollard recounted his experience meeting a family whose son was still missing. However upon his most recent visits, Mr Pollard has documented Artsakh as a beautiful, colourful and thriving place with a population of well-educated, forward-thinking and ecologically aware citizens. Russell is currently working towards the “20 Year Peace Project” – an exhibition of photos of a person born in Artsakh taken each year since the War. Mr Pollard is also the author of an extremely informative and comprehensively researched essay on the deceptive Azeri propaganda surrounding Khojaly, which can be found here. This essay is a personal favourite of mine as it deliberately excludes any Armenian sources; and uses Azeri or Azeri-sympathetic sources to undermine the image of Khojaly portrayed by the Azeri government and its embassies around the world. The rest of Mr Pollard’s blog can be found here.

“Paradox” was the word that Dr Antranig Kasbarian used to describe Artsakh; it is a land of abundance, but also a land of severe shortages. For 70 years it was an “underdeveloped outpost of the Soviet Union,” but has now progressed from isolation into a sustainable economy. Although agriculture and construction drive the economy, Artsakh must be praised for its booming energy sector. Its hydroelectric and solar power projects have made Artsakh not only totally self-sufficient, but also a net producer of energy. The government has also taken the initiative to contract foreign experts to provide advice on making Artsakh more attractive to foreign investment, especially in the IT and agricultural sectors. Artsakh’s executive body is also working towards locating markets for local produce abroad, namely in Armenia, Russia, Ukraine and Georgia. This reflects a growing trend in Nagorno-Karabakh as an ecologically aware and open society, a far cry from the decades of desolation in the USSR. Population trends is another pertinent issue facing Artsakh, which has been marginally relieved by Syrian-Armenians finding refuge in the lands over the last several years.

Mr Manoyan closed off the presentations through a brief history of the lands. An intriguing point made is that Azerbaijan relinquished all association with its Soviet past following its independence – raising the argument that Azerbaijan has no legitimacy over governance of Artsakh. This has been enforced by two referenda whereby the population of Artsakh exercised democratic rights to maintain their wish of independence. The Wilsonian right to self-determination, which is a century-defining political ideal, thus undoubtedly should apply in this case.

We at AYF London would like to thank both the panelists for their analyses of Artsakh and excellent presentations, as well as the audience for their thought-provoking questions and comments for the panel. We would also like to thank all of our sponsors for supporting this event. The event reflected a general force of optimism for the Armenian lands of Artsakh, which should be defended from Azeri hegemony regardless of their well-funded propaganda machine – something I witnessed first hand from its embassy pamphlets at UCL’s Fresher’s Fair. These lands have incredible potential for exponential economic growth through tourism and foreign investment.