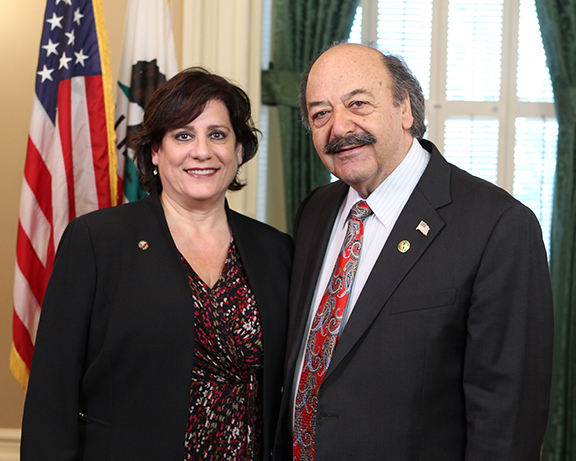 (ASBAREZ) SACRAMENTO—Assembly Member Katcho Achadjian, (R-San Luis Obispo) on Monday honored Nora Hovsepian as the 2015 Woman of the Year. In addition to her work as an attorney at law for more than 25 years, Hovsepian is the Chairwoman of the Armenian National Committee of America Western Region and a passionate activist on behalf of all past, present and future Armenians.

“Ms. Hovsepian is an extraordinary leader throughout the state in the movement to bring awareness to Armenian issues,” said Achadjian. “She has touched countless lives through her unwavering dedication and continues to ensure that we do not forget the atrocities of the Genocide. We are fortunate to have such a compassionate and giving person working so hard on behalf of all Armenians,” commented Achadjian.

As a granddaughter of Armenian Genocide survivors, Nora has dedicated her life to advocating for Justice for the Armenian People. The ANCA Western Region is the largest Armenian-American grassroots advocacy organization with chapters in the 19 western United States. In this capacity, Nora leads an expansive network of activists representing the organization to the public and local, State and Federal elected officials to promote issues of importance to the Armenian-American community. This year in particular is a monumental landmark for the Armenian Community as it marks the 100th anniversary of the Armenian Genocide in April.

“I am honored to be recognized alongside so many amazing women from throughout the state. I am continually inspired and humbled to work alongside so many dedicated descendants of Genocide survivors who strive for truth and justice on a daily basis. To Assemblyman Achadjian, I am thankful for this recognition and for the attention this brings to current Armenian issues and remembrance of those who perished in the Genocide,” commented Hovsepian.

Each year as part of Women’s History Month, members of the State Assembly choose an outstanding woman to honor as Woman of the Year. Started in 1987, the Woman of the Year Award has become an annual celebration of community service and outstanding contributions by women in California.