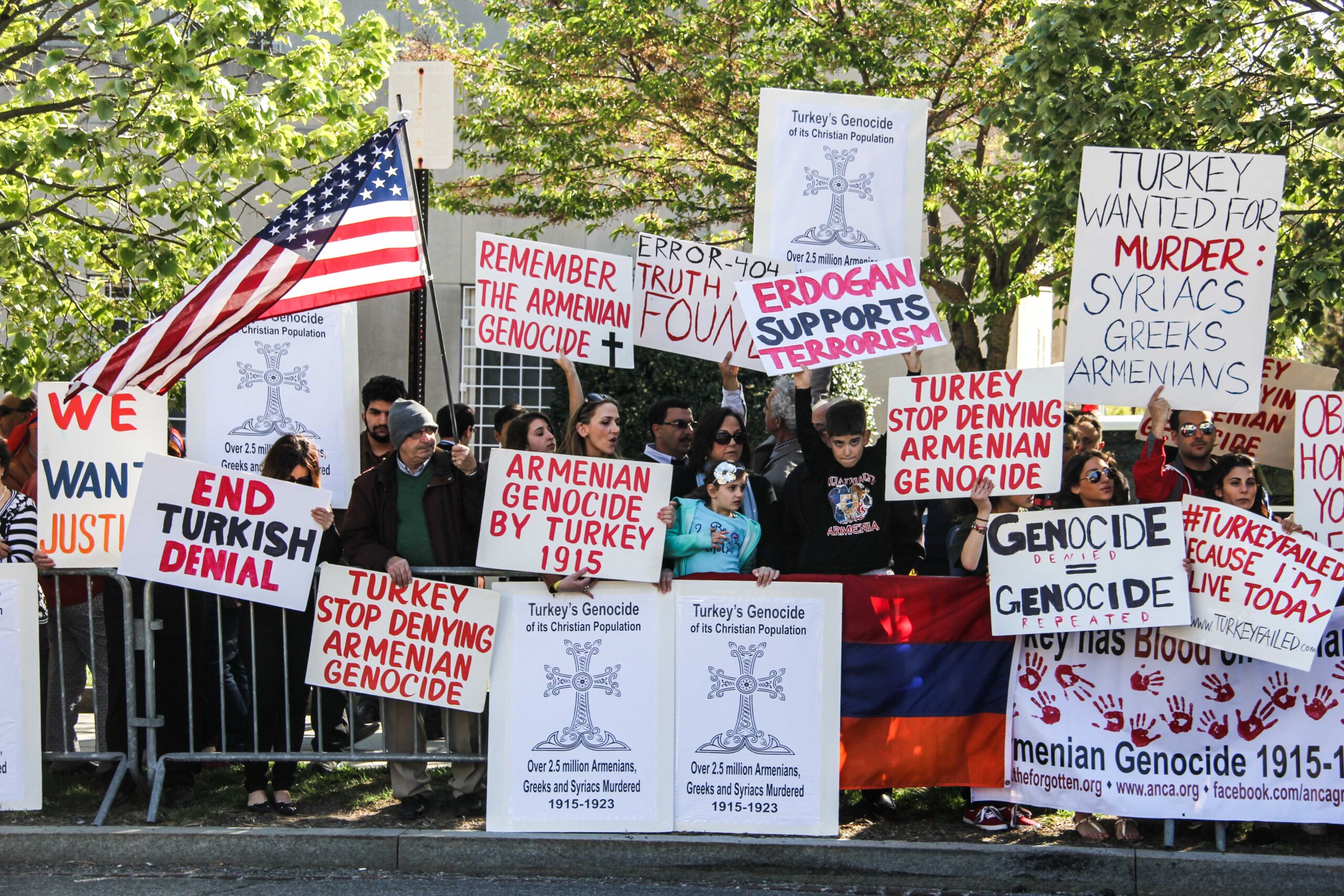 WASHINGTON–Hundreds of local families held a silent vigil in front of the Turkish Embassy on April 24th, protesting the Turkish Government’s denial of the Armenian Genocide and calling for justice for this crime. The solemn remembrance was met by several dozen anti-Armenian counter-protesters – who blasted Turkish music in a shameful celebration of the murder of 2 million Armenians, Pontian Greeks and Syriacs at the hands of the Ottoman Turkish Government form 1915 to 1923.

“We are here to tell Turkey that we stand up for the truth and we will continue to do so every year until justice is served for the Armenian Genocide,” said Hagop Simonian, Chairman of the Armenian Youth Federation Washington Ani Chapter, which organized the annual protest. “With the support of our community, we see a growing number of youth joining us every year – and that speaks volumes as we expand the international battle to defend the rights of the Armenian nation.”

The dances and cheers by Turkish counter-protesters to pop-music pumped out of speakers powered from the Turkish Embassy stood in stark contrast to the PR plans of Prime Minister Recep Tayip Erdogan, who sought, through a statement of “condolence” issued just one day before, to repackage his denials under the banner of “shared pain.” The timing and sentiments expressed in his remarks are widely seen as a disingenuous ploy to undermine efforts to secure international affirmation and reparations for the Armenian Genocide.

“The Turkish Prime Minister on the one hand is trying – in a rather clumsy and transparently cynical manner – to present himself as some sort of peacemaker by repackaging his denials in a more sophisticated way, but at the same time his Embassy in Washington is supporting protests cruelly mocking the victims of the Armenian Genocide,” said ANCA Executive Director Aram Hamparian. “The fact is that Turkey is escalating its denials of this crime.”

A highlight of the 2014 protest was the participation by the Hye Riders Motorcycle Club, over a dozen of whom rode some 3,000 miles from Southern California over a four day period to stand with the Greater Washington DC community against Turkey’s lies. The group rode past Armenian and Turkish protesters along Washington’s historic Massachusetts Avenue with Armenian flags waving.

“We are here to support the DC Armenian Community and to let them know that we are not backing away in the face of Turkish lies,” said Hye Riders president Berdj Kasbarian. “Whether it’s 99 years, 110 or more – Armenians stand together united and a cause like this will continue until we get justice.” Established in 1999, the organization is known for its annual participation in Southern California Armenian Genocide protests and for their generosity for a broad range of community initiatives. Asked if they will be able relax and tour DC for a few days after their long trip, Kasbarian declined noting that the group will be hurrying back to Los Angeles to support the AYF San Fernando Valley Sardarabad Chapter “Cycle Against Denial” bike-a-thon, taking place Sunday, April 27th.

An important goal of the protest was to spotlight the strength and vitality of the Armenian nation in the face of Turkey’s genocide acts – powerfully relayed through the innovative “#TurkeyFailed” social media campaign, launched by the AYF Eastern Region earlier in the week. “#TurkeyFailed because I am alive today,” read one sign carried by a chapter member; “My Grandma survived the Armenian Genocide – #TurkeyFailed,” read another as protesters stood defiant against the Turkish Government.