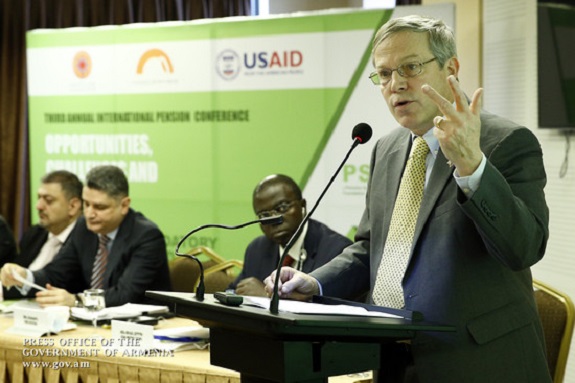 YEREVAN—Despite continuing public demonstrations against the Armenian government’s new, controversial pension reform law and President Serzh Sargsyan’s acknowledgement that 80 percent of the Armenian public are opposed to it, the United States envoy in Armenia announced on Friday (February 21) that it strongly supports the unpopular reform.

The United States voiced strong support on Friday for a controversial pension reform implemented by the Armenian government, RFE/RL’s Armenian service (Azatutyun.am) reported, with U.S. Ambassador John Heffern saying that it is vital for Armenia.

Speaking at a conference in Yerevan, Heffern echoed the Armenian government’s arguments in favor of a measure that has sparked street protests by young workers now required to save a significant portion of their income for their future pensions. He said this will not only give hundreds of thousands of Armenians “safe and adequate pensions” but also reduce tax evasion and boost the country’s fledgling financial sector.

Speaking from Washington D.C., the Executive Director of the Armenian National Committee of America, Aram Hamparian, voiced his disappointment at the U.S. government’s support for the pension reform law.

“The US Congress, reflecting the will of the American people, rejected a relatively modest effort by President Bush to privatize a portion of our Social Security system,” Hamparian said in his comments.

“So, why then is our U.S. government — in the face of public protests and broad-based political opposition — so persistently pushing for a far more extreme model of pension privatization in Armenia?”