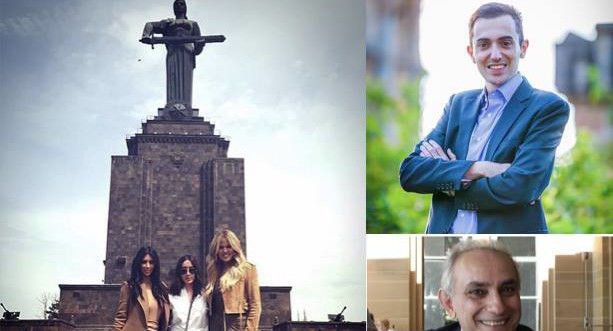 ANC Australia Executive Director, Vache Kahramanian’s interview on ABC News on the ‪‎Kardashian‬s’ visit to ‪Armenia‬ for the centenary of the ‪‎Armenian Genocide

Kardashians the key to recognition of 1.5 million deaths in 1915 Armenian Genocide

(702 ABC Sydney) MARK COLVIN: They may be the ultimate in fame for its own sake, but the Kardashian family have made themselves into a rich, multinational business brand.

But there may be nowhere they’re more famous than their ancestral homeland of Armenia, where the family has been greeted by adoring crowds.

It’s Kim and Khloe Kardashian’s first visit to the small Caucasus republic, and their trip comes ahead of the centenary of the Armenian Genocide on April thte 24th – a genocide which Turkey still disputes.

JESSICA KIDD: The Armenian media has been stirred into a frenzy as they try to keep up with the Kardashians.

The family, made famous by their reality TV show, has landed in Yerevan, the capital of the country their ancestors once called home.

Kim Kardashian and her sister Khloe were greeted by young women bearing bread and salt, which is a traditional custom to welcome guests.

JESSICA KIDD: Adoring fans watched on as the sisters’ entourage – which included famous spouse Kanye West and baby North – made their way out of the airport.

JESSICA KIDD: But the Kardashians’ trip is also an important pilgrimage for the family.

A key part of it is their visit to the Armenian Genocide Memorial Complex in Yerevan.

Armenians claim that in 1915, as many as 1.5 million people were killed during the First World War as the Ottoman Empire was falling apart, a claim supported by several other countries.

It’s a controversial part of history that still causes tension between Turks and Armenians.

But the Kardashians’ visit has drawn praise from Armenians around the world.

Vache Kahramanian is the executive director of the Armenian National Committee of Australia.

VACHE KAHRAMANIAN: I can personally say being an avid Facebook user, that my newsfeed seems to only be about Kim Kardashian visiting Armenia at the moment. So there’s been a lot of positive commentary around the family’s visit, being there. It’s a moment of pride to see someone of such high profile visiting Armenia.

JESSICA KIDD: Armenians say the profile the Kardashians have will help as they push for recognition of the genocide.

VACHE KAHRAMANIAN: Kim Kardashian’s family are descendents of survivors of the Armenian genocide, so this is an extremely personal issue to the Kardashian family as it is to the Armenian people and the Armenian nation.

Such high profile individuals such as Kim and her family carry immense weight in terms of educating and raising awareness.

JESSICA KIDD: Is there a danger though, or a perception perhaps that these celebrities, and let’s take the Kardashians as our example, are using these trips to boost their own profile?

VACHE KAHRAMANIAN: The Armenian genocide is not an issue to garner publicity or to increase ones notoriety.

JESSICA KIDD: Turkey rejects any claims it carried out genocide against the Armenians. It says hundreds of Armenians were killed, but that happened when Russia invaded Ottoman territory.

To Armenians though, Turkey’s refusal to recognise what took place still burns.

VACHE KAHRAMANIAN: Scholars, jurists have sat down, discussed the concept of genocide and have determined overwhelmingly that what happened between 1915 to 1923 constituted genocide.

Today what we see is a political dimension to genocide recognition and we see Turkey as the successive state of the Ottoman empire, spending hundreds or millions of dollars denying the historical reality of what occurred in that time.

And he’s also critical of the Australian parliament for not recognising the deaths as genocide.

MICHAEL CARAPIET: I draw a parallel to the situation Australian, white Australia found itself with, with the Aboriginal population and then for prime minister Rudd issued an apology on the nation, and this was after many, many years of talking about it.

It didn’t satisfy everybody, but I think many, many people feel a lot happier because of it. From a personal point of view, I think a significant wrong should be recognised and people should do what they can to right the wrong.