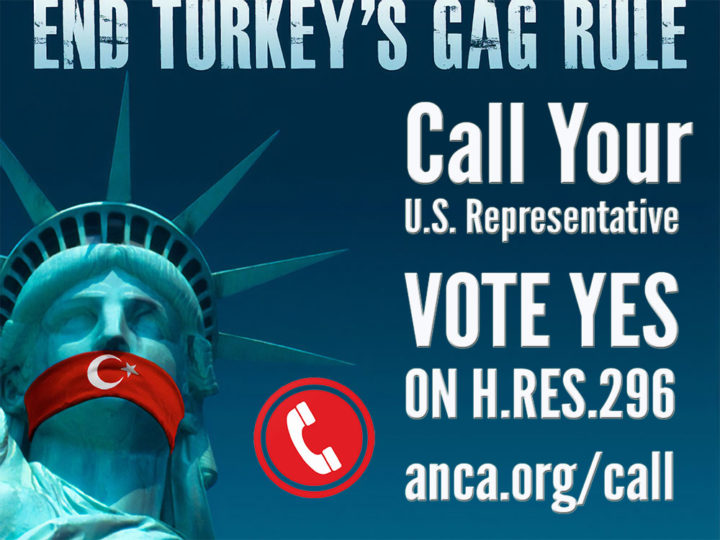 WASHINGTON, DC – For the first time in more than 30 years, the U.S. House of Representatives is set, over the course of the coming week, to hold an up-or-down vote on the Armenian Genocide Resolution (H.Res.296), a bipartisan measure locking in U.S. recognition that would, if adopted, strike a powerful blow against the gag-rule that Ankara has long enforced against honest American remembrance of this crime, reported the Armenian National Committee of America (ANCA).

House Majority Leader Steny Hoyer (D-MD) announced that the Armenian Genocide Resolution (H.Res.296) would be on the House docket the week of October 28th, along with H.R.4695, the Protect Against Conflict by Turkey Act that would impose harsh sanctions on Turkey over its recent invasion of northern Syria, which has displaced hundreds of thousands, killed hundreds.

“With the president caving-in to Erdogan, it’s up to Congress to speak out for America,” ANCA Executive Director Aram Hamparian told Yahoo News. He added that the resolution would be a “signal” to the Turks that “that Washington won’t be bullied, U.S. policy can’t be hijacked, and American principles are not for sale.” The full Yahoo News article is available here.

The ANCA has worked closely with House and Senate leaders to secure votes on H.Res.296 and its Senate counterpart – S.Res.150 – since their introduction in April, 2019. The ANCA Quick Connect Call-Alert – anca.org/call – is the latest nationwide campaign to support for the measure, directly connecting advocates to speak with their legislators with just a few clicks. Thousands of letters have already been sent to Congress by ANCA Rapid Responders and Armenian American advocates through the ANCA online portal – anca.org/genocide.

Congressional Armenian Caucus leaders Rep. Frank Pallone (D-NJ), Rep. Peter King (R-NY), Rep. Jackie Speier (D-CA), Rep. Adam Schiff (D-CA), and Rep. Gus Bilirakis (R-FL), welcomed the opportunity for a House floor vote on the Armenian Genocide Resolution. “At a time when Turkey has launched a campaign into Northern Syria, which has killed hundreds and displaced hundreds of thousands of civilians, it is all the more important that the House speak clearly and directly about crimes against humanity, whether they occurred a century ago or in the present day. Next week, all Members of the House can go on record to state clearly the historic fact of the genocide, joining 49 U.S. states and many of our closest allies that have already taken this important step,” stated the Armenian Caucus leaders.

Rep. Adam Schiff, who along with Rep. Gus Bilirakis introduced and is spearheading the bipartisan measure, added, “This is a moment that has been years in the making, and I’m grateful for the tireless advocacy of so many who insisted that the United States must never be a party to genocide denial.” He went on to note, “Recent weeks have brought images of families and children fleeing their homes in terror, headed to nowhere except away from the bombs and mortars. These images make the memory of one hundred years ago feel like yesterday. Denial of genocide causes pain to the survivors, yes, but it also gives succor to human rights abusers of today, who can rest easy that the passage of time and the accumulation of power will wipe clean their reputation.”

Over the past week, members of Congress have been making a steady stream of references to the Armenian Genocide on social media and during Congressional hearings focusing on Turkey’s invasion of northern Syria.

“When I came here 23 years ago, one of the things I thought was morally incumbent upon Congress was to recognize the first genocide of the 20th century – the Armenian Genocide. We were told ‘But Turkey is a great ally of the United States; don’t put that at risk.’ How’s that working out for us?,” asked Rep. Sherman. He continued, noting, “Does the dishonoring of America and the undercutting of our reputation of speaking the truth, was that worth it? Did we get some great help, alliance, love, loyalty from Erdogan?”

Video of Rep. Sherman’s exchange with the State Department representatives is available here:

“I was struck by the animosity. It reminded me of the hatred they [Turkey] had for the Armenians that led to the Armenian Genocide,” said Rep. Chris Smith (R-NJ).

Rep. Dina Titus (D-NV), in discussing Turkey’s recent invasion of northern Syria, noted, “We should have known what the Turks are capable of. You can ask Armenia, ask Greece, ask Cyprus now – they’re drilling in their territory.”

Rep. Jim Costa (D-CA) offered a powerful floor statement in support of the immediate passage of H.Res.296. “The road to justice begins with full recognition of the Armenian people’s suffering,” said Rep. Costa. “Both Turkey and the United States, immediately, should recognize that the Armenian genocide occurred, as the European Union has done. I am proud to support H. Res. 296 which, over the objections of Ankara, would establish permanent U.S. recognition and ongoing American remembrance of the Armenian genocide. That is the right thing to do.”

Video of Rep. Costa’s statement is available at:

Earlier today, Rep. Zoe Lofgren (D-CA), chair of the Committee on House Administration, offered a strong message of support for passage of H.Res.296. “The US is supposed to condemn bad actors when they violate human rights & kill our allies, not aid & abet them. Instead of capitulating to Erdogan’s demands, Trump should: 1. Sanction Turkish officials responsible for these atrocities; 2. Stop selling arms to Turkey for use in Syria; 3. Revoke visas of Erdogan’s bodyguards who assaulted protestors on US soil; 4. Recognize the Armenian Genocide.”

Virginia Congressman Don Beyer told Yahoo News, “It’s time to start holding Turkey accountable for its actions. Both Congress and the White House have remained silent on this issue for far too long, and I look forward to changing that next week.”

Prior to going to the House Floor, the House Rules Committee, chaired by Rep. Jim McGovern (D-MA), must decide the “rules” upon which the resolution will be taken up on the floor. The committee’s recommendation and the full floor vote on H.Res.296 can come at any time through Thursday, October 31st. “Not acknowledging the genocide is a stain on our human rights record and sends the exact wrong message to human rights abusers around the world,” Rep. McGovern told Yahoo News regarding House consideration of H.Res.296.

The Armenian Genocide Resolution (H.Res.296), introduced in April, 2019, by Representatives Adam Schiff and Gus Bilirakis, is a bipartisan measure which locks in permanent U.S. recognition and commemoration of the Armenian Genocide, ends U.S. complicity in Turkey’s denial, and promotes public education regarding the crime as a genocide prevention tool. Senators Robert Menendez (D-NJ) and Ted Cruz (R-TX) have spearheaded the Senate version of the resolution (S.Res.150). Over 120 U.S. Representatives and more than 18 Senators are cosponsors of the measures.

The Armenian Genocide was the centrally planned and systematically executed slaughter of the Armenian people, carried out by the Ottoman Turkish Government from 1915-1923. The Greek and Assyrian / Chaldean / Syriac communities suffered the same fate, with over 2.5 million Christians killed in that time period. April 24th is the international day of commemoration of the Armenian Genocide.

The United States embarked on an unprecedented international humanitarian campaign, mandated by Congress in 1916 through the establishment of Near East Relief, saving over 130,000 orphans and some 1 million survivors of the Armenian Genocide by providing assistance valued at over $2.5 billion in current dollars.

The U.S. first recognized the Armenian Genocide in 1951 through a filing which was included in the International Court of Justice (ICJ) Report titled: “Reservations to the Convention on the Prevention and Punishment of the Crime of Genocide.” The specific reference to the Armenian Genocide appears on page 25 of the ICJ Report: “The Genocide Convention resulted from the inhuman and barbarous practices which prevailed in certain countries prior to and during World War II, when entire religious, racial and national minority groups were threatened with and subjected to deliberate extermination. The practice of genocide has occurred throughout human history. The Roman persecution of the Christians, the Turkish massacres of Armenians, the extermination of millions of Jews and Poles by the Nazis are outstanding examples of the crime of genocide.”