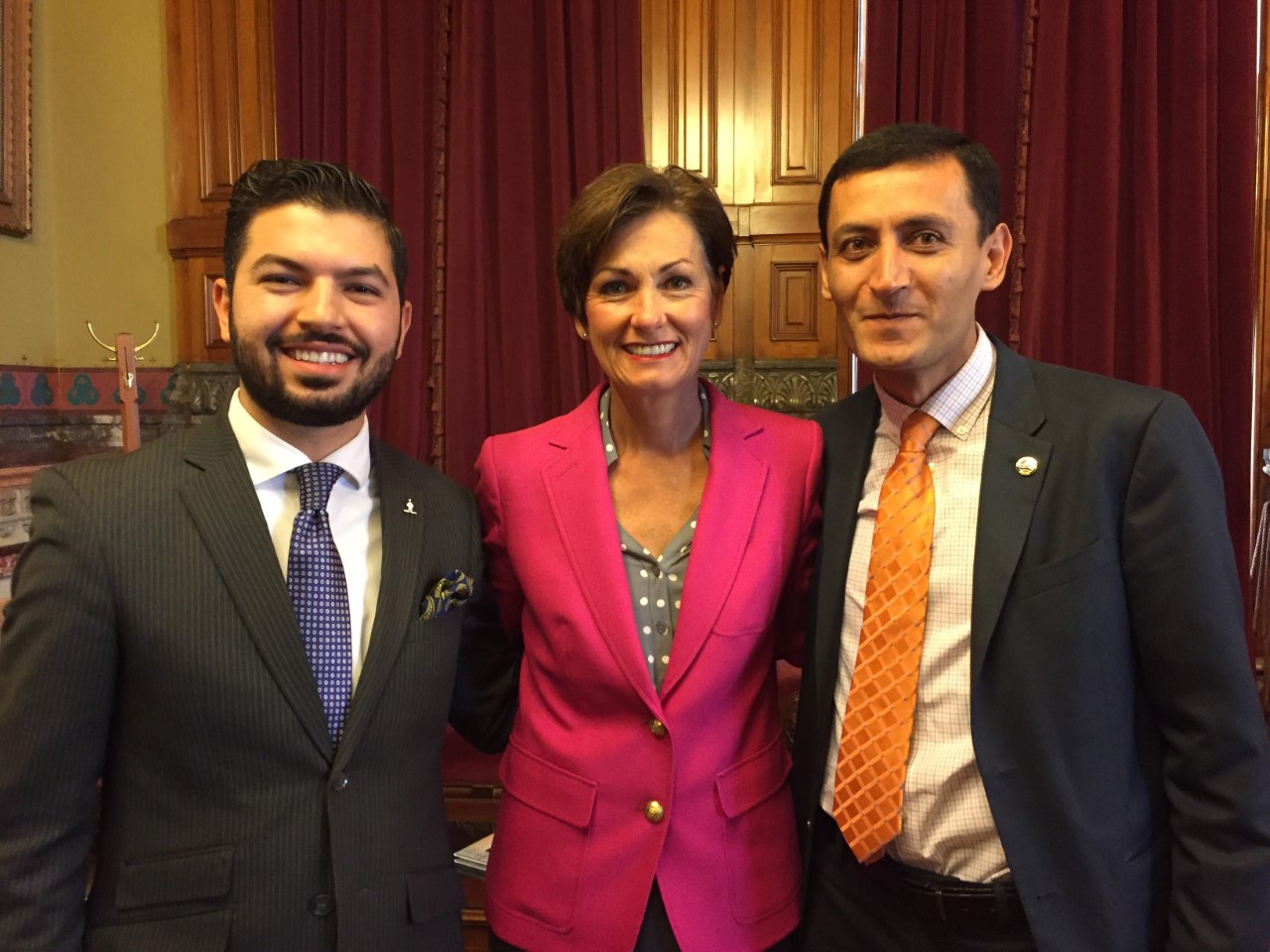 During the official signing ceremony, attended by ANCA-ER leaders and a coalition of human rights groups, including representatives of the Iraqi Christian Relief Council, The Philos Project, and Iowans for Armenia, Governor Reynolds also declared October, 2017, “Armenia Awareness Month.” The ceremony, which was webcast live on the ANCA Facebook page, concluded with a moving prayer offered by Rev. Fr. Tadeos Barseghyan of St. Sahag Armenian Church of Minnesota, which is the closest Armenian church serving the Armenian-American community of Iowa.

“Iowa’s commemoration and condemnation of the Armenian Genocide strikes a powerful blow against the hatred and intolerance which contribute to the ongoing vicious cycle of genocide plaguing society to this day,” said ANCA Eastern Region Board Member Armen Sahakyan, who spent a portion of his youth in the Hawkeye state. “We would like to thank Governor Reynolds, Representative Art Staed, and all of our coalition partners for their principled stance in ensuring that truth prevails against international attempts to subvert justice for this and all other crimes against humanity.”

The Philos Project Executive Director Robert Nicholson noted, “The Ottoman genocide of the Armenian people was one of the most brutal acts in history and clear evidence that evil still moves in the world. To deny the genocide is to ignore that evil, and to ignore that evil is to betray our values as Americans. By recognizing the genocide, the people of Iowa are declaring their willingness to defend human life, protect minority communities, and preserve our national heritage. We at The Philos Project thank and congratulate Governor Reynolds for her boldness and moral clarity. She epitomizes the kind of principled leader we need more of today.”

Iraqi Christian Relief Council Board Member Denise Bubeck said, “This is an important step in standing up for the many Christians who have lost their lives by injustice. As a Christian, I believe that every life deserves dignity and respect just as God values every human life so this proclamation gives me an opportunity again to speak for the value of every life no matter their faith.”

“Mankind must seek justice for those whose lives are brutally altered for all of history,” said President of the Iraqi Christian Relief Council and the Senior Fellow for The Philos Project Juliana Taimoorazy. “This marks a historic step forward towards this sacred endeavor.”

Coordinator for the Iowans for Armenia Charles Crawley said, “As a civilized humanity, we all should care about the Armenian Genocide and all other crimes against humanity. ‘Iowans for Armenia’ is proud to continue the relationship created between the American and Armenian people that stretches back to the humanitarian assistance provided by the missionaries and people of good conscience of our great state through the Near East Relief. Today’s signing of the proclamation was an important step in securing some measure of justice for the Armenian, Assyrian, and Greek people.”

Noting that the Ottoman Turkish government’s crime “still requires justice,” Gov. Reynolds’ proclamation cites Adolph Hitler’s ominous reference to the murder of the Armenian people just days prior to his invasion of Poland and the ensuing Holocaust, which claimed the lives of over 6 million Jews, and resulted in the decimation of other targeted racial and religious minorities. The document recounts the cycle of subsequent genocides of the 20th and 21st centuries, specifically mentioning the 2016 Congressional condemnation of the Islamic State genocide against Middle East Christians, Yezidis and other minorities. It concludes with the assertion that by “recognizing and consistently remembering the Armenian Genocide, the Holocaust and all cases of past and ongoing genocide, we help protect historic memory, ensure that similar atrocities do not occur again and remain vigilant against hatred, persecution and tyranny.”

The full text of the Iowa proclamation is provided below. Video of Gov. Reynolds’ reading and signing of the proclamation:

Alabama, Indiana, and Mississippi are the last three U.S. states that have not yet properly memorialized and condemned the Armenian Genocide.

WHEREAS, from 1915-1923 during the Armenian Genocide, one and one-half million ethnic Armenian men, women and children as well as over one million Greeks, Assyrians, Syriacs and others were massacred as part of the planned complete eradication of those indigenous communities by the Ottoman Turkish Empire during the first modern genocide that still requires justice; and

WHEREAS, prior to the implementation of the Holocaust, in order to garner support from his followers, Adolf Hitler asked, “Who, after all, speaks today of the annihilation of the Armenians?”; and

WHEREAS, the Holocaust was the state-sponsored, systematic persecution and annihilation of European Jews by Nazi Germany and its collaborators between 1933 and 1945 – six million Jews were murdered; Roma (Gypsies), people with disabilities and Poles were also targeted for destruction or decimation for racial, ethnic or national reasons; and millions more, including homosexuals, Jehovah’s Witnesses, Soviet prisoners of war and political dissidents, also suffered grievous oppression and death under Nazi tyranny; and

WHEREAS, the United States House of Representatives has adopted H.Con.Res. 75, declaring the atrocities perpetrated by the ISIL against Christians, Yezidis and other religious and ethnic minorities in Iraq and Syria war crimes, crimes against humanity and genocide; and

WHEREAS, by recognizing and consistently remembering the Armenian Genocide, the Holocaust and all cases of past and ongoing genocide, we help protect historic memory, ensure that similar atrocities do not occur again and remain vigilant against hatred, persecution and tyranny:

NOW, THEREFORE, I, Kim Reynolds, Governor of the State of Iowa, do hereby proclaim the month of October, 2017 as

IN TESTIMONY WHEREOF, I HAVE
HEREUNTO SUBSCRIBED MY NAME AND
CAUSED THE GREAT SEAL OF THE STATE OF
IOWA TO BE AFFIXED. DONE AT DES MOINES
THIS 24TH DAY OF AUGUST IN THE YEAR
OF OUR LORD TWO THOUSAND SEVENTEEN.

(rt.com) The governor of Iowa has issued a proclamation officially recognizing as genocide the killing of 1.5 million Armenians by Ottoman Turkey from 1915 to 1923. While 46 other US states have done so, the genocide remains unrecognized by the federal government.

“The planned complete eradication” of Armenians in 1915-23 by the Ottoman Turkish Empire during the first modern genocide “still requires justice,” Iowa Governor Kim Reynolds (R) said in the proclamation, which declared October 2017 as “Armenia Awareness Month.”

By recognizing and consistently remembering the Armenian Genocide, the Holocaust and all cases of past and ongoing genocide, we help protect historic memory, ensure that similar atrocities do not occur again and remain vigilant against hatred, persecution and tyranny,” the document reads, as it recounts subsequent genocides of the 20th and 21st centuries.

The document also references Adolf Hitler’s statement prior to his invasion of Poland and the ensuing Holocaust: “Who, after all, speaks today of the annihilation of the Armenians?”

The move was welcomed by Armenians in the US.

“Iowa’s commemoration and condemnation of the Armenian Genocide strikes a powerful blow against the hatred and intolerance which contribute to the ongoing vicious cycle of genocide plaguing society to this day,” said Armen Sahakyan, of the Armenian National Committee of America.

Iowa is the 47th US state to officially classify and commemorate the 1915-23 annihilation of Ottoman Turkey’s indigenous Armenian community as genocide.

In May, the Texas House of Representatives unanimously passed a resolution to that effect.

The US federal government has not officially made such recognition. American presidents have long declined to use the word “genocide” in relation to the killings, every year choosing other words to commemorate them.

Donald Trump followed the tradition. “Beginning in 1915, one and a half million Armenians were deported, massacred, or marched to their deaths in the final years of the Ottoman Empire,” he said in a statement in April. “I join the Armenian community in America and around the world in mourning the loss of innocent lives and the suffering endured by so many.”

Recognizing the Armenian genocide was one of former President Barack Obama’s campaign promises, but when in office, he declined to do so.

“I am very sorry that, during our time in office, we in the Obama administration did not recognize the Armenian Genocide,” former UN Ambassador Samantha Power said after leaving office.

Turkey, the successor of the Ottoman Empire, denies that a genocide occurred, saying those killings were casualties of war. The country is now a NATO ally and hosts the US military.

A total of 28 nations have officially recognized the Armenian Genocide, including Russia, France, Canada and Germany.