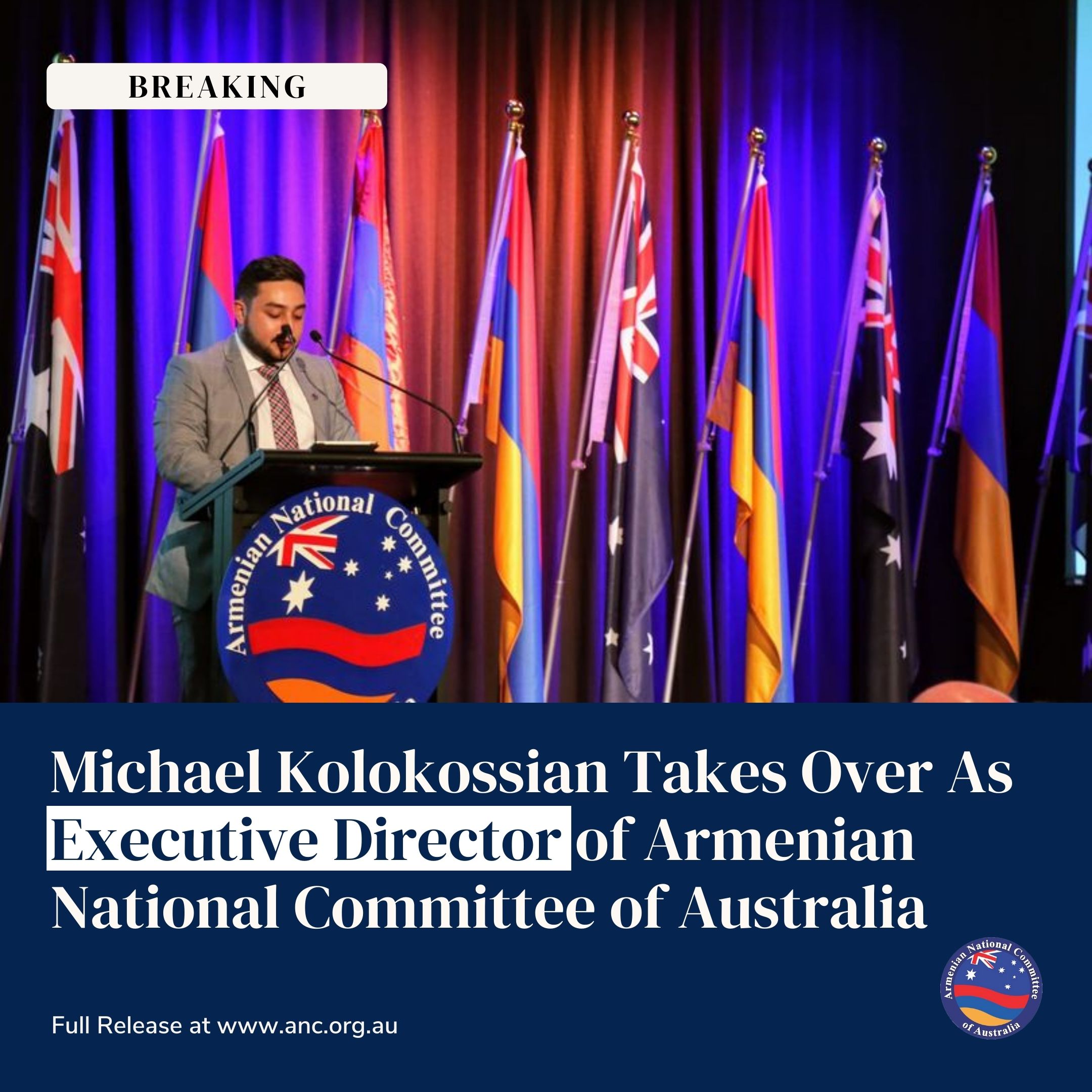 The Armenian National Committee of Australia (ANC-AU) National Board has announced the appointment of Michael Kolokossian to take over from Haig Kayserian as the Armenian-Australian community’s peak public affairs organisation’s new Executive Director.

A former staffer in New South Wales State Parliament, Kolokossian moves into the role after serving as the ANC-AU’s Political Affairs Director, and possesses a wealth of experience representing the Armenian-Australian community in public life.

Kolokossian served as an adviser in the office of a NSW state parliamentarian after initially entering the workforce as an Administrator at the ANC-AU head office. He has previously served as Chair of the ANC-AU – Western Sydney Branch and also served as part of the Armenian National Committee of the United Kingdom (ANC-UK). He is studying a Bachelor of Law and Arts, majoring in International Law and Global Governance, at Macquarie University.

Kayserian, who has served as Executive Director of the ANC-AU since 2018, will remain on the Board of the organisation. He said he was “delighted to be passing on the baton to such a capable and deserving colleague”.

“Michael Kolokossian embodies the Armenian-Australian community and has a deep respect and understanding of our nation’s politics,” Kayserian said. “I couldn’t be more proud and delighted to be leaving my role knowing that my esteemed colleague of many years will build on our successes in coming months and years.”

“We planned this succession towards the end of the previous parliamentary term, believing the recent Federal Elections presents a perfect opportunity to elevate Michael to lead our office for Australia’s 47th Parliament,” Kayserian added.

Kolokossian has committed to leading the battle for justice for the Armenian Genocide, for the rights to self-determination of the Armenians of the occupied Republic of Artsakh (Nagorno Karabakh), and for the interests of the local community in Australian public affairs.

“Having worked in the Armenian National Committee of Australia head office for a number of years, I am honoured by this opportunity to succeed Haig in working night and day to represent the public affairs interests of our community with our young team of administrators, including Mathew Mikhail, Noor Chirenian, Arineh Izmirlian and Danielle Der Bedrossian,” Kolokossian said.

“We have made major strides in our pursuit for national recognition of the Armenian Genocide, Australia’s stance on the Nagorno Karabakh conflict and for resources that have made our community more sustainable. The opportunity is there to build on this by recommitting to our grassroots outreach programs and expanding our reach within our community and in the hallways of power across the country.”

“I am excited by this challenge and thank the ANC-AU Board for entrusting me with this responsibility,” Kolokossian added.

ANC-AU Chairperson, Vache Kahramanian said: “We are in a fortunate position to be able appoint Michael Kolokossian and a team from the endless line of young Armenian-Australians ready to take on Canberra and all our capital cities in the responsibility to lead our community’s public affairs interests.”

“We wish Michael luck and thank Haig for implementing such a dynamic succession plan that will elevate the Armenian National Committee of Australia to even greater heights,” Kahramanian added.