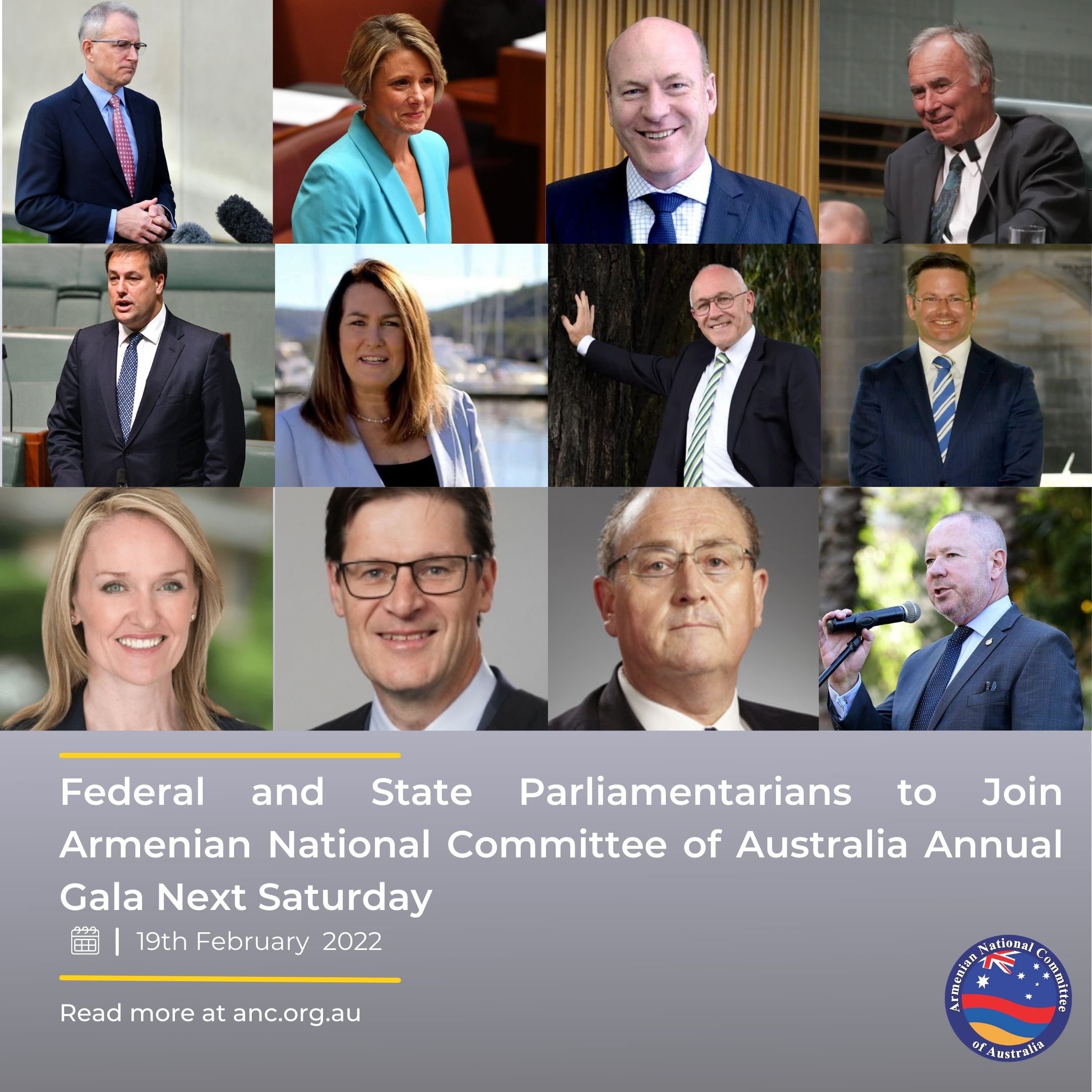 Australia’s Minister for Communications, Urban Infrastructure, Cities and the Arts, Hon. Paul Fletcher MP and Deputy Leader of the Opposition in the Senate, Senator Hon. Kristina Keneally will headline the list of Federal, State and Local Government dignitaries at the Armenian National Committee of Australia’s Annual Gala at the Museum of Contemporary Art in Sydney on Saturday 19th February 2022.

The ANC-AU Ben Bagdikian Media Award will also be presented, recognising those in media who have had the most significant impact raising awareness concerning matters important to Armenian-Australians. Awarded to Alan Jones in 2019, who was Australia’s highest-rating radio broadcaster, and James Robins in 2020, a New Zealand-based journalist.

Johnny O’Han and his band will provide the entertainment on the night.

“We very much look forward to finally celebrating the 2021 ANC-AU Annual Gala, which is an opportunity for our organisation to report on our community’s collective achievements in advocacy over the past year,” said ANC-AU Executive Administrator, Sarine Soghomonian.

“It is also an opportunity for the Armenian-Australian community to show their appreciation for the efforts of prominent people promoting Armenian issues in Australian public life.”

Member for Bradford, Minister Paul Fletcher was the first Federal parliamentarian to speak for the rights to self-determination of the indigenous Armenians of the Republic of Artsakh in 2010, and has remained a steadfast supporter of national recognition of the Armenian Genocide.

Senator Kristina Keneally, formerly the Premier of New South Wales, is Australia’s Shadow Home Affairs Minister, Shadow Minister for Immigration and Citizenship, Shadow Minister for Government Affairs and an outspoken advocate for issues of importance to the Armenian-Australian community.

The two front-bench members of the Government and Opposition, respectively, are high-profile members of the Australian Friends of Artsakh network along with their fellow honoured guests at the ANC-AU Annual Gala.

Member for North Sydney, Trent Zimmerman is the founding co-chair of the Armenia-Australia Inter-Parliamentary Union and a vocal advocate for the community, most recently in 2021, when he moved a motion on International Day of Commemoration and Dignity of the Victims of the Crime of Genocide and the Prevention of this Crime, calling on the Australian government to formally recognise the Armenian Genocide.

Zimmerman was among the first Federal-led Armenian Delegation to visit Armenia in September 2019 and was also one of the inaugural signatories of the Australian Friends of Artsakh network along with Member for Bennelong, John Alexander, who has been a longstanding advocate of Armenian Genocide recognition and a champion in defending the self-determination of indigenous Armenians of the Republic of Artsakh, where he visited in 2019 as the first Federal Australian parliamentarian and was subsequently honoured by the country’s president and with the Armenian National Committee Freedom Award.

Damien Tudehope is the NSW Minister for Finance, Minister for Employee Relations, and a signatory of the Friends of Artsakh network. He has spoken to bring awareness about the Sumgait Massacres against the Armenians of Nagorno Karabakh in NSW Parliament and supported Armenian Genocide recognition.

Member for Oatley, Mark Coure is the NSW Minister for Multiculturalism and Seniors, and is a member of the Parliamentary Friends of Armenia group. He has been an active supporter of the Armenian-Australian community and has shown support for the self-determination of the Armenian Republic of Artsakh by becoming a signatory of the Australian Friends of Artsakh network.

Natalie Ward, the NSW Minister for Metropolitan Roads and the Minister for Women’s Safety and the Prevention of Domestic and Sexual Violence, is a signatory of the Friends of Artsakh network and most recently spoke in support of Armenian, Assyrian and Greek Genocide recognition at the Sydney March for Justice in 2021.

NSW Member for Davidson, Speaker Jonathan O’Dea chairs the NSW  Parliamentary Friends of Armenia group, and has worked tirelessly to advocate for Armenian issues within NSW Parliament, including leading a 2013 state parliamentary delegation to Armenia and Artsakh.

Shadow Minister Walt Secord is Vice-Chair of the NSW  Parliamentary Friends of Armenia group, having championed Armenian issues throughout his political career, as well as visiting Armenia, Artsakh and Western Armenia on his travels.

NSW Member for Prospect, Hugh McDermott, is another visitor of Armenia and Artsakh and among the most vocal advocates for Armenian Genocide recognition, while strongly supporting the self-determination of the Republic of Artsakh. In 2020, McDermott championed a successful motion in the largest legislative chamber of Australia’s largest state, the NSW Legislative Assembly, condemning Azerbaijan’s provocative attacks against Armenia’s border and calling on Australia’s Federal Government to join his state in recognising the Republic of Artsakh.

High-profile media pundit and former Federal Government Minister, Graham Richardson will also be among the guests, which will include community and religious leaders from the Armenian-Australian, Assyrian-Australian, Greek-Australian and Jewish-Australian communities.