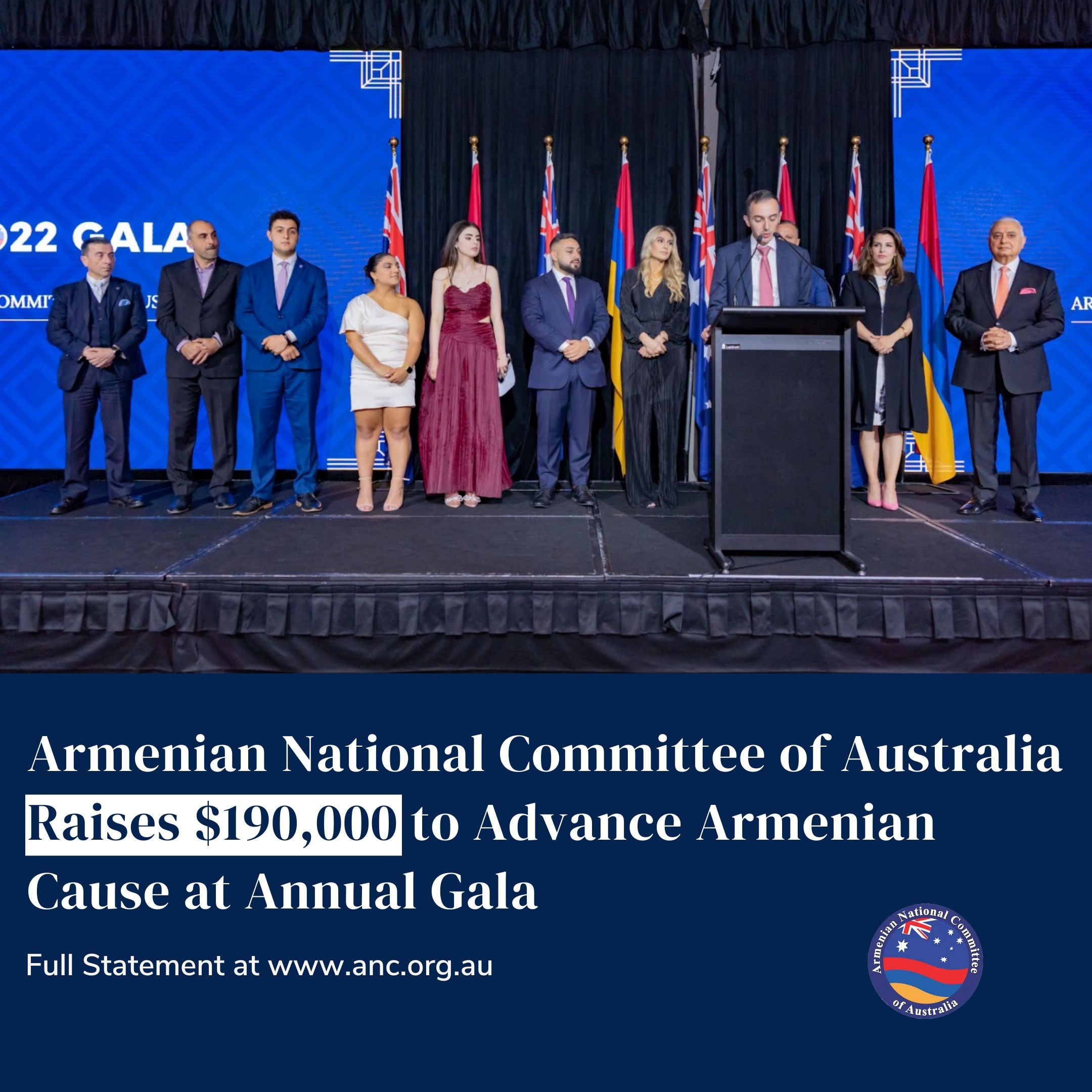 The night of nights of the peak public affairs body of the Armenian-Australian community was held at the Shangri-La in Sydney, on Saturday 3rd December 2022, in the presence of over 270 supporters and prominent Australians, as international guest Dr Arman Tatoyan was among the honourees along with Member for Berowra Julian Leeser MP and journalist Michael Rubin.

The ANC-AU Annual Gala is a staple event in the Armenian-Australian calendar and presents an opportunity for the community to celebrate the public achievements of the Armenian National Committee of Australia and show appreciation to the closest allies championing the Armenian cause on the shores of Australia.

A feature on the ANC-AU Youth Advocates cohort of 2022, prepared by Australian-Armenian videographer Berj Varjabedian, also premiered at the Gala fresh from the group’s exploits advocating for Australian recognition of the Armenian Genocide and the Republic of Artsakh in the Federal Parliament during this year’s Advocacy Week. Participants from the program were also present at the Gala and were handed certificates by the Kortian family, who sponsored this year’s program with the ANC-AU Internship Program’s Hagop Kortian Scholarship.

ANC-AU Executive Director Michael Kolokossian rose to give his first advocacy address since being appointed to lead the organisation in August 2022, and used his speech to make two major announcements –– the expansion of the ANC-AU’s outreach initiatives with an addition to the organisation’s Internship Program with the high school-targeting Junior Advocates to be launched in 2023, funded by anonymous donors, and the expansion of the ANC-AU office into the national capital, with a dedicated part-time staffer.

Kolokossian thanked the Armenian-Australian community for entrusting the peak public affairs body to advance issues of concern to them, and said: “We are proud to be your voice. We are honoured to be your ANC-AU. We are humbled to be your Hai Tad. And together, hand in hand, shoulder to shoulder, this is our fight, and we thank you for joining us.”

Armenia’s former Human Rights Defender, Dr Arman Tatoyan, who is visiting from Yerevan as the founder of the Centre for Law and Justice ‘Tatoyan’ Foundation, addressed the community as the event’s keynote after accepting the organisation’s highest honour, the Armenian National Committee Freedom Award.

The ANC-AU also presented Julian Leeser MP, Shadow Minister for Indigenous Australians and Shadow Attorney-General, with the Armenian-Australian Friend of the Year award on the night, in appreciation of his outspoken advocacy, promoting recognition and justice for the Armenian Genocide and peace and freedom for the Republics of Armenia and Artsakh.

Michael Rubin, a senior fellow at the American Enterprise Institute, was announced as the Ben Bagdikian Media Award recipient for 2022, as a result of his powerful advocacy and widespread awareness-raising on the Armenian Genocide, the Turkey-backed Azerbaijani attacks against Armenia, and unwavering support for the freedom and peace in the Republic of Artsakh.

The night included one of the most anticipated segments at every ANC-AU Annual Gala, an auction that included some one-of-a-kind pieces, including a framed commemorative collage of the first Armenian speeches signed by the Hon. Johnathan O’Dea MP, the Hon. Walt Secord MLC, the Hon. Victor Dominello MP and Rev. Fred Nile MLC and an Armenian cognac bottle, signed by the former Human Rights Defender of the Republic of Armenia.

The auction and donations made throughout the night helped raise $190,000 to support the grassroots advocacy efforts of the Armenian National Committee of Australia.